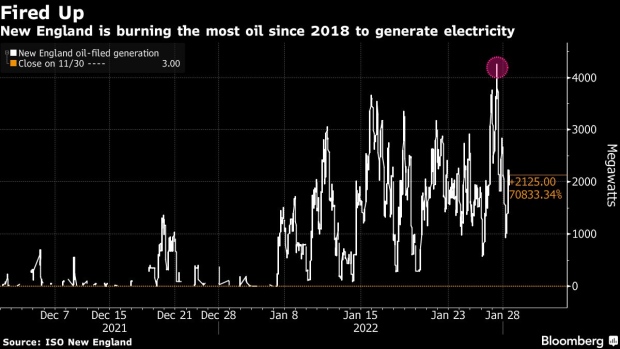 (Bloomberg) -- New England is relying on oil-fired generators for the most electricity since 2018 as a frigid blast boosts demand for power and natural gas prices soar.

Oil generators were producing more than 4,200 megawatts early Thursday, accounting for about a quarter of the grid’s power supply, according to ISO New England. That was the most since Jan. 6, 2018, when oil plants produced as much as 6.4 gigawatts, or 32% of the grid’s output, said Wood Mackenzie analyst Margaret Cashman.

Oil is typically used only when demand spikes, because of higher costs and emissions concerns. Consumption has been consistently high over the past three weeks as some generators switch from gas, which has surged in price in recent months. New England generators are producing power from oil at an average rate of almost 1.8 gigawatts so far this month, the highest for January in at least five years.

Oil’s share declined to 16% Friday morning ahead of an expected snowstorm, which was “a surprise,” Cashman said.

“It makes me wonder if some of those generators are aiming to reserve their fuel for this weekend,” she said.