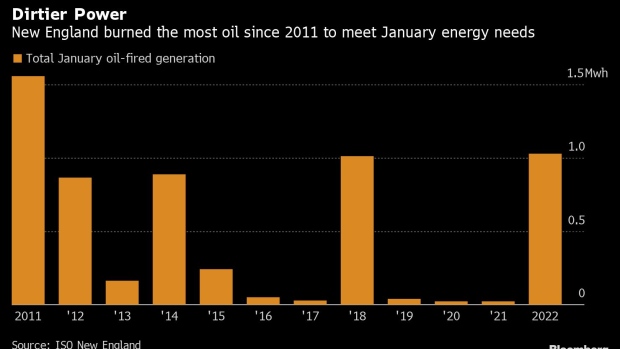 (Bloomberg) -- New England has burned the most oil to generate electricity in over a decade this winter, despite being only a couple hundred of miles away from one of the world’s largest fields of natural gas. That’s driving up emissions and putting politicians and industry leaders at odds.

Oil generators produced 1.03 million megawatt-hours of power in January, the most since 2011, according to data from ISO New England Inc., which manages the six-state grid. That came while crude was flirting with the highest prices since 2014. Even so, prices for natural gas in the region surged to almost five times the level seen in other U.S. states as frigid weather boosted demand for heating.

“Determining which resources operate is based on price. In January, high prices for natural gas led oil-fired generation to often be less expensive than gas-fired generation and, therefore, it was dispatched first,” ISO New England spokesman Matthew Kakley said in an email.

New England has limited ability to bring fuel from neighboring states in the gas-prolific Appalachia basin, which produces about one third of U.S. natural gas, due to a lack of pipelines. Because of this, the region has to burn dirtier oil and import liquefied natural gas from other nations to meet peak winter demand for energy. Making the situation worse, a shortage of LNG in Europe and Asia further raised costs.

Higher energy costs earlier this month led a group of senators including Democrat Elizabeth Warren of Massachusetts to urge the Biden Administration to consider halting permit approvals of U.S. LNG export facilities, while reviewing the impact of LNG shipments on domestic prices.

“Despite the heavy burden rising natural gas prices has placed on American families, the U.S. is exporting record levels of natural gas to other countries, a trend that is only expected to continue,” the senators, mostly from New England, wrote in a Feb. 2 letter to Energy Secretary Jennifer M. Granholm.

The move prompted a response from the nation’s top shale-gas producer.

In a Wednesday letter to Granholm, EQT Corp. Chief Executive Officer Toby Rice said banning LNG exports would have no impact on New England gas prices since the region has no active LNG export facilities and that the problem could be fixed by allowing the completion of pipelines that have been been delayed or canceled amid fierce opposition from environmental groups.

“Had New England allowed the construction of pipelines into its region, it would be consuming the same amount of natural gas that it is today, but without the exorbitant costs being borne by its citizens,” Rice said. The lack of ample gas supplies have also forced the region to burn more polluting fossil fuels, including coal, to meet their energy needs. “This energy mix, for which the pipeline cancelation movement is accountable, is comparable to what is seen in undeveloped countries, not the U.S.”

Natural gas burns cleaner than coal and oil, and is touted by supporters as a bridge fuel into a clean-energy era. Still, it’s primarily methane, a greenhouse gas several times more powerful than carbon which is frequently released into the atmosphere during the extraction process and transportation.

Carbon-dioxide emissions across ISO New England’s power network jumped 51% in January to nearly 4.2 million metric tons from a year earlier, according to preliminary grid data based on fuel type. Emissions from oil plants climbed 5,109% to 1.7 million metric tons to become the leading pollutant surpassing gas generation. Last January, oil accounted for less than 1% of generation for the month.

New England coal and oil generation is having a negative impact on emissions, Williams Cos. Chief Executive Officer Alan Armstrong said Tuesday on a conference call with investors. “It’s all fun and games to block a pipeline until you start to realize the impact of that cost. And certainly, New England has seen that in very real terms and continues to see that,” he added.