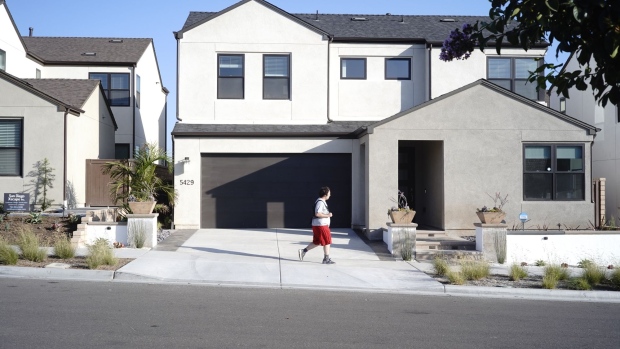 (Bloomberg) -- Sales of new U.S. homes rose in August by more than forecast, reaching a four-month high and suggesting demand is stabilizing as builders make gradual headway on backlogs.

Purchases of new single-family homes increased 1.5% to a 740,000 annualized pace following an upwardly revised 729,000 in July, government data showed Friday. The median estimate in a Bloomberg survey of economists called for a 715,000 rate.

The residential real estate industry is facing a number of cross-currents. While underlying demand is solid, builders are struggling to fill orders because of unsteady supply chains and difficulty finding workers. The August sales gain was driven by a pickup in homes not yet started, indicating construction activity will remain firm in the months ahead.

The report, produced by the U.S. Census Bureau and the Department of Housing and Urban Development, showed the median sales price of a new home held at a record $390,900. There were 378,000 new homes for sale as of the end of August, the most since October 2008. While more than a quarter of those had not yet been started, the numbers of properties finished and under construction picked up and indicated modest progress on clearing builder backlogs.

At the current sales pace, it would take 6.1 months to exhaust the supply of new homes, compared with 6 months in July and 3.6 months at the start of the year.

Transportation bottlenecks and elevated input costs earlier this year have stymied builders such as Lennar Corp. and KB Home and contributed to a run-up in housing prices.

“The supply chain for both land and construction is significantly stressed and that will continue into the fourth quarter and beyond,” Stuart Miller, Lennar’s executive chairman, said on the company’s Sept. 21 earnings call.

Miller said “the industry will not be able to quickly remedy the supply shortage with increased production. Accordingly, we expect the market to remain in its current balance, or should I say imbalance, for an extended period of time.” Still, lumber prices have come down after surging earlier in the year on a pandemic-induced mismatch of supply and demand. A measure of homebuilder sentiment ticked higher in September for the first time in five months, the National Association of Home Builders said in a report Monday.