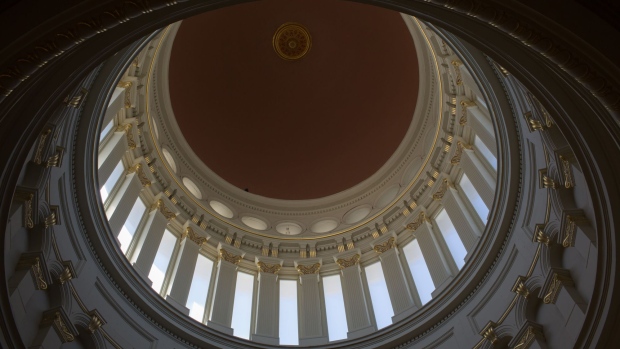 The rotunda of the New Jersey State Capitol building is seen during renovations in Trenton, New Jersey, U.S., on Thursday, May 14, 2018. Governor Phil Murphy, who once called his predecessor's back-channel financing of New Jersey's $300 million statehouse renovation "an insult and an exercise in arrogance," now says the money is being well spent. Photographer: Alex FLynn/Bloomberg , Bloomberg

Details on what will be cut will come later Friday, she said at a Trenton news conference. The state in March froze $920 million in spending as revenue plunged during the pandemic. Muoio said the cuts mostly will apply to municipal aid, property-tax relief, college assistance and other areas.

“There isn’t going to be one easy solution,” Muoio said.

Governor Phil Murphy’s administration expected a $2.75 billion revenue shortfall for the current fiscal year. Neither he nor Muoio would detail how New Jersey will fill the rest of the hole.

The state had improved its financial condition since Murphy came to office, the treasurer said, including boosting the surplus and making the first rainy-day fund deposit in a decade. Covid-19, Muoio said, “stopped this progress in its tracks.”