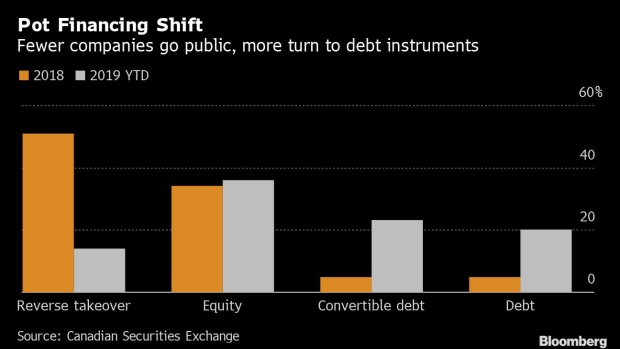 The bud of a cannabis plant is seen on plant inside the KannaSwiss GmbH greenhouse facility near Kerzers, Switzerland, on Thursday, Oct. 19, 2017. KannaSwiss, a company founded in 2014, is already producing marijuana that meets Switzerland’s legal standard containing no more than 1% Tetrahydrocannabinol—known as THC, the psychoactive chemical that gets you high. Photographer: Stefan Wermuth/Bloomberg , Photographer: Stefan Wermuth/Bloomberg

(Bloomberg) -- The slump in pot stocks hasn’t affected the amount of financing activity in the space this year, but it’s had a dramatic impact on the type of deals being done.

The Canadian Securities Exchange, which lists 173 cannabis stocks, closed 614 financings worth C$2.47 billion ($1.88 billion) through September compared with 622 worth C$2.57 billion for the same period last year. Of the money raised, 78% went to pot companies, unchanged from last year.

But a deeper dive into the data show that primary listings have largely been replaced by secondary offerings as fewer companies go public and those that are already public seek more funding. Cannabis stocks have lost more than half their value since March amid disappointing results, regulatory issues and vaping-related health fears.

“The numbers show that on a year-to-date basis we’re tracking just behind 2018 in terms of the amount of money raised, but the nature of that money has changed,” CSE Chief Executive Officer Richard Carleton said at a cannabis investor day hosted by the the exchange and OTC Markets Group last week in New York.

Last year, 51% of deals done on the CSE were reverse takeovers, cannabis companies’ favored method of listing on the public markets. This year, that number is just 14%. Instead, more companies are raising money by issuing convertible debt and other forms of borrowing, both of which have increased significantly as a percentage of total money raised.

This is affecting business at the Canadian investment bankers that service the pot industry. Alfred Avanessy, managing director for investment banking at Cormark Securities Inc., said he’s seen equity financing fees decline by 50% to 75% this year but overall revenue generated from the cannabis industry is steady due to an increase in M&A activity. The smaller companies have been particularly hard hit, he said.

“I think the market is shut for the smaller guys, at least for now,” Avanessy said in a phone interview. “It’s not a price issue, it’s a demand issue.”

Of the 10 largest financings year-to-date on the CSE, all of them are from cannabis companies but only two -- Vireo Health International Inc. and Indus Holdings Inc. -- were new listings. The remainder were debt, convertible debt or equity.

Here’s a look at the top five:

Meanwhile, companies that have chosen to stay private are still seeing healthy appetite from venture capitalists, according to data from Pitchbook Data Inc. compiled by Canopy Rivers Inc.

CDC Finds THC in Most Tested Vaping Samples, No Causes Yet

Scientists Are Working Overtime to Debunk the Vaping Scare