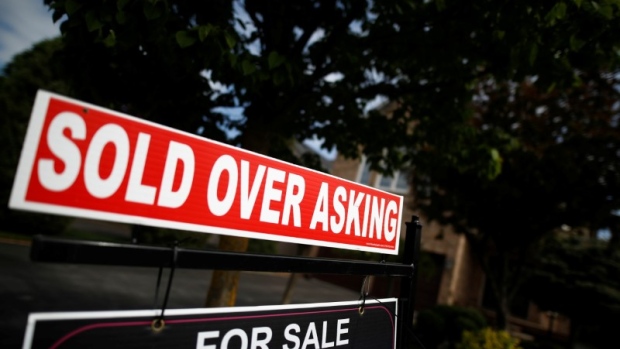 A real estate sign in a suburb of Toronto , Reuters/Mark Blinch

TORONTO — New stricter mortgage rules are expected to slow the housing market next year, but prices are still expected to rise about five per cent, according to a report by Royal LePage.

In its market survey forecast, the real estate firm says its house price composite, which measures prices in 53 Canadian cities, is expected to increase 4.9 per cent next year to $661,919.

A new stress test for homebuyers who don't need mortgage insurance will be required starting next year.

The new rules are expected to reduce the maximum amount buyers who have a down payment of 20 per cent or more will be able to borrow starting Jan. 1.

Royal LePage said some potential buyers looking to upgrade may delay listing their homes as they will not be able to access sufficient financing for a planned new home.

However, it said that with further diminished affordability, it is likely that demand for entry-level properties will surge.

"Aggressive home price inflation is still more of a threat today than the risk of a market crash in Toronto or Vancouver. On the other side of the coin, regions where demand is soft and already struggling to absorb the supply of homes for sale may have difficulty adjusting to these measures."

The Royal LePage report suggests home prices in the Greater Toronto Area are expected to increase 6.8 per cent in 2018, while the Greater Montreal Area is expected to see an increase of 5.5 per cent.

Greater Vancouver is expected to increase 5.2 per cent in 2018.

Meanwhile, the Teranet-National Bank national composite house price index for November was down 0.5 per cent from the previous month, the third consecutive monthly decline.

The index fell in four of the 11 metropolitan areas surveyed including Toronto, Hamilton, Ottawa-Gatineau and Edmonton.

Compared with a year ago, the national composite index was up 9.2 per cent, the smallest 12-month gain since June 2016.