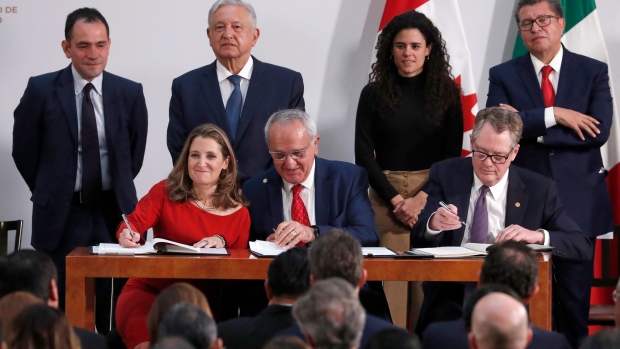 OTTAWA - The federal government's economic assessment of the new North American free-trade deal says it will be worth $6.8 billion to the Canadian economy by 2025, compared with having no continental trade agreement at all.

The long-awaited assessment the Liberals presented today says the new United States-Mexico-Canada Agreement is much better than letting the U.S. tear up the old NAFTA and put tariffs on Canadian steel, aluminum and automotive exports.

It doesn't say what effect the deal will have on the Canadian economy compared with just leaving the existing agreement alone, talking mainly about preserving jobs and trade rather than increasing them.

A report earlier this week by the C.D. Howe Institute think tank said all three countries will be worse off under the new agreement but the researchers there agreed that it's better than nothing.

Negotiations over continental trade were forced on Canada and Mexico by U.S. President Donald Trump, who mused about scrapping NAFTA if it weren't renegotiated in America's favour.

The U.S. and Mexico have both ratified the new deal, while Canada's Parliament is still working through it.