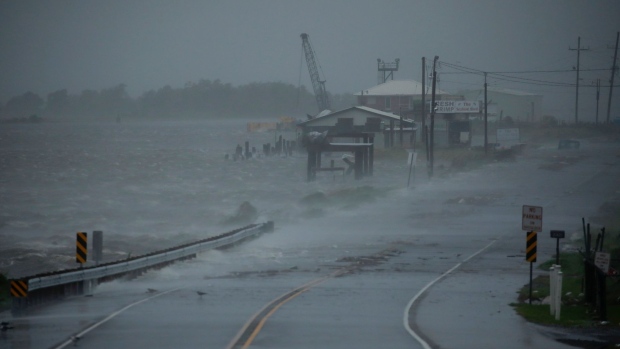 Storm surge begins to encroach on Louisiana Route 1 ahead of Hurricane Ida in Golden Meadow, Louisiana, U.S., on Sunday, Aug. 29, 2021. Hurricane Ida made its final push toward Louisiana Sunday, packing some of the strongest winds ever to hit the state and threatening to unleash widespread flooding and destruction in New Orleans. , Bloomberg

(Bloomberg) -- New Orleans may be without power and air conditioning for more than three weeks in the wake of Hurricane Ida, which roared ashore with more powerful winds than Hurricane Katrina, according to utility owner Entergy Corp.

About 122,000 homes and businesses were without power across Louisiana as of 1:30 p.m. local time on Sunday, according to Poweroutage.us, which tracks utility outages. The blackouts were concentrated in the southeastern tip of the state that includes New Orleans and where Ida made its U.S. landfall.

Hours earlier, Entergy shut its 1,152-megawatt Waterford nuclear plant about 25 miles (40 kilometers) west of the city and will keep it offline until local grid issues are assessed after the storm.

“Customers in the hardest-hit areas should plan for the possibility of experiencing extended power outages,” the company warned in a tweet.