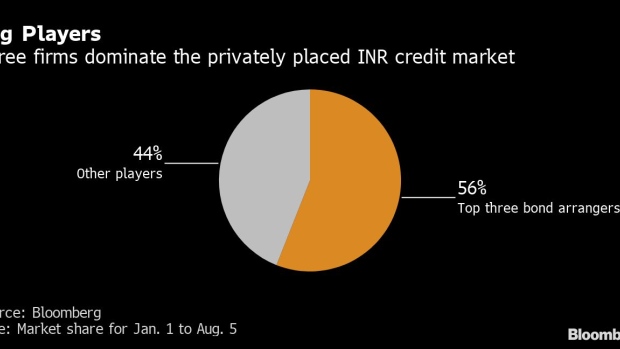 Shoppers and various vegetables at the Azadpur wholesale market in New Delhi, India, on Sunday, June 5, 2022. India's Ministry of Agriculture data show tomato price inflation surged to 61% month on month in May. Even so, other vegetable prices have come down sharply from elevated levels in April. Photographer: Anindito Mukherjee/Bloomberg , Bloomberg

(Bloomberg) -- India’s plan to expand its corporate bond market faces an unexpected impediment because the regulator is considering tightening control of trading platforms that allow investments in company debt in just a few clicks.

While the proposed framework is designed to protect investors and is therefore being welcomed by some, a few of the proposals by the Securities and Exchange Board of India could actually prove counterproductive and hurt liquidity, according to experts who spoke to Bloomberg. That’s because the sale of unlisted debt would be banned, platforms would be forbidden to sell privately placed corporate notes on to non-institutional investors soon after acquiring them, and trades would need to be settled via routes that today are not commonly used.

Market participants have until Aug. 12. to give officials their input on the matter.

“The trade off is very often between creating depth in the market and ensuring investor protection,” said Shilpa Mankar Ahluwalia, a partner at law firm Shardul Amarchand Mangaldas & Co. “The regulator ideally needs to strike a fine balance between investor protection and innovation, also recognizing that online bond platforms have the potential to widen access and deepen the corporate bond market.”

Opening up India’s corporate bond market is an important part of Prime Minister Narendra Modi’s pledge to almost double the size of the economy to $5 trillion by 2025. As it stands, the local-currency bond market offers easier access only for the top-rated issuers, with big local banks and brokers doing deals based on long-standing relationships.

Bond platforms, either start-ups or businesses backed by banks or brokers, have boomed in India with more than a dozen financial technology platforms emerging in the last three years, competing for a share of the $1.9 trillion market for time deposits. They mainly target individual investors with a promise of much higher interest rates by putting money into company debt, and allow for minimum investments that can be as low as 10,000 rupees ($126).

Easy access through an interface similar to that of online shopping websites and the prospect of higher returns can be appealing to novices. The platforms, though tiny, have grown more than six times over two years with debt mainly sold to non-institutional investors, Sebi said in a consultation paper last month.