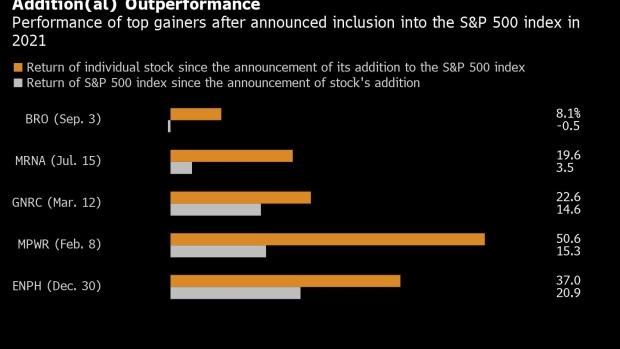 (Bloomberg) -- FactSet Research Systems Inc., whose shares have jumped more than 40% this year, may have outgrown the S&P MidCap 400 Index and could soon find itself in the flagship S&P 500.

So could Molina Healthcare Inc. or Signature Bank.

S&P Dow Jones Indices is set late Friday to announce its quarterly changes to the weightings of its major indexes to account for shifts in market capitalization. S&P sometimes uses these quarterly rebalancings to make changes to the membership of the indexes to reflect the market’s moves.

New entrants to the S&P 500 must have a market value above $13.1 billion and meet profitability, liquidity and share-float standards.

There could be some openings to fill. IHS Markit Ltd. will exit the S&P 500 once its acquisition by S&P Global Inc. is completed, as will Xilinx Corp. after it is purchased by Advanced Micro Devices Inc. Moreover, there are dozens of companies in the S&P 500 whose market values have slipped below the threshold for being added to it, making it possible that some of them will be bumped out.

In 2021, four of the 15 new entrants have come from the technology sector. Financial data firm FactSet, with a market value of over $17 billion, is the largest technology stock in the MidCap 400. And the removal of competitor IHS Markit from the index as a result of the merger would make FactSet a natural replacement -- though S&P Dow Jones could hold off on such a move until after the deal closes.

“It would certainly make sense given FactSet’s market cap size ($17.7 billion) and similar information services business to IHS Markit which will no doubt be leaving the index once the deal with S&P Global goes through,” Craig Huber, CEO of Huber Research Partners, said in an email.

If FactSet is added to the benchmark, “it would be natural to assume that it could be another tailwind for that stock,” said Keith Housum, analyst at Northcoast Research. “Shares of FactSet have already been a great performer over the past few months, but if added to the S&P 500, I’d expect it would continue to rally as investors try to get ahead of the addition.” The stock has gained 60% since a low on Feb. 25.

Two other MidCap 400 companies that are similar in size to FactSet could also be contenders: Molina Healthcare, the largest health-care company in that index, and Signature Bank, a regional bank that has developed a digital payments network called Signet that helps to facilitate cryptocurrency transactions. Only one financial-sector company, Brown & Brown, has been added to the index in 2021.

“An index rebalancing is a big deal for the added companies, especially if they are being added to a major index like the S&P 500,” said Bloomberg Intelligence analyst Larry Tabb, the head of market structure research. “Moving onto the S&P means increased liquidity, tighter spreads and increased attention from not only investors but analysts as well. Making the S&P 500 means that the company has made the big leagues.”

Being added to the S&P 500 can also provide a boost to a company’s stock price, given the trillions of dollars in the funds that track the index and buy its underlying shares. Yet it’s no sure thing: In September, Match Group Inc. and Ceridian HCM Holding Inc. saw their shares rise 7.5% and 0.1%, respectively, on the day after their addition to the index was announced, but Brown & Brown Inc. fell 1.4%.

The December rebalancing has occasioned some high-profile additions to the S&P 500. Tesla Inc. was added in 2020, a year after Live Nation Entertainment Inc., Zebra Technologies Corp. and Steris Plc were included. Meta Platforms Inc., formerly called Facebook, became a member in December 2013. Still, there were no additions from 2014 to 2018 that coincided with the December rebalancing.

While there are no new megacap names that currently meet the criteria for inclusion into the S&P 500, several stocks in the MidCap 400 have gotten big enough to warrant the move up.

S&P does not make the discussions around inclusions public, but the committee that chooses the stocks may consider which sector a company operates in so that the index best represents the broader economy. In recent years those changes have reflected the growing presence of the technology and health-care industries.