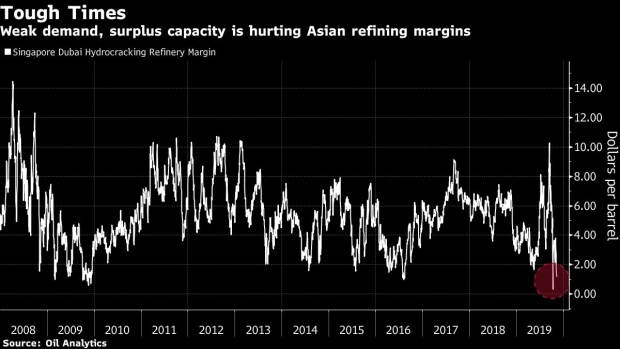 (Bloomberg) -- A surge in diesel demand next year following a shake-up to ship-fuel rules is forecast to boost Asian refiner profit margins, which are languishing at the lowest seasonal level in more than a decade.

Processors are expected to have a “very positive” year in 2020 as refining margins for complex plants in Asia increase by $3.50 to $4 a barrel, according to consultant Wood Mackenzie Ltd. Returns from producing light and heavy fuels may diverge significantly in April after regulations stopping ships without scrubbers from carrying high-sulfur fuel oil take effect on March 1, said Victor Shum, vice president of energy consulting at IHS Markit Ltd.

Asian refiners are grappling with the lowest profits for this time of the year since at least 2008 as a slew of new plants in the region add to a fuel glut, while a spike in freight rates and the ongoing trade war dent demand. An expected pick-up in margins ahead of IMO 2020 ship-fuel rules that take effect Jan. 1 hasn’t materialized as quickly as expected.

Vessel owners are waiting until the last moment to convert to using cleaner ship fuel, Sushant Gupta, downstream research director at Wood Mackenzie, said at a media briefing in Singapore, predicting there would be “a lot of movement” in December. Next year will be “positive” for refiners and “gasoil will be the main driver,” he said.

At least 7 million to 8 million tons of less-sulfurous fuel is currently sitting in onshore and offshore facilities at or near Singapore, with 40% in floating storage, according to Gupta. While some will be used for bunkering, a portion will be utilized to flush the tanks of vessels to accommodate the less-pollutive fuel, he said.

While refiners will see a boost in 2020, profit margins are expected to resume declines the following year through 2023 or 2024 due to global capacity additions, Gupta said.