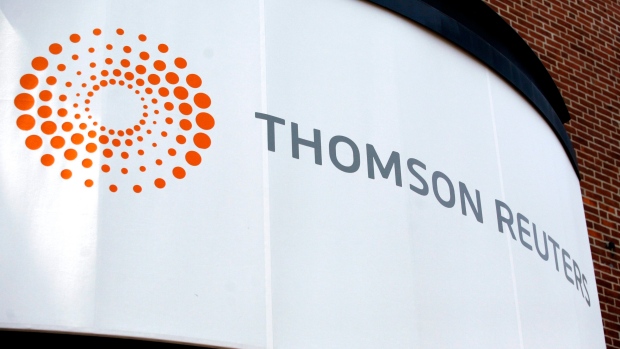 The Thomson Reuters office in Boston , The Canadian Press

TORONTO - Thomson Reuters's chief executive said Tuesday that the company has performed well through the COVID-19 crisis, but he's eager to make further improvements going into next year.

“Let me assure you that we'll execute with urgency,” Steve Hasker told analysts on a conference call held after the information and media company released its quarterly results.

Hasker a former president of Nielsen Holdings, has been CEO of Toronto-based Thomson Reuters since mid-March, succeeding Jim Smith, who oversaw a series of business transitions over eight years.

Among Smith's initiatives was increased emphasis on using artificial intelligence for Thomson Reuters business services and a move of the company's executive offices from the United States back to Toronto, home to an emerging AI hub.

Hasker said his team's plan for the future is a “logical progression” to enhance and optimize its business - which focuses on professional information tools for law, tax, accounting and government clients.

“Our markets are stable and growing, and we're not contending with regulatory issues or crippling competitive dynamics,” Hasker said.

But he added that “we still have excessive complexity for a company of our size.”

“It's abundantly clear to me that we have a game-changing opportunity to transition to a simple - simpler, more integrated, innovative and agile operating company.”

“We've got dozens of websites, e-commerce sites, document management systems, call centers. And they add up to a customer experience that has room for improvement.”

He said Thomson Reuters is very confident that it can dramatically improve customer experience and margins.

Hasker and chief financial officer Michael Eastwood said the company had already exceeded its 2020 goal of finding US$100 million of savings by about US$30 million as of the end of the third quarter on Sept. 30.

The company increased several of its full-year 2020 financial estimates including adjusted EBITDA margin, free cash flow and capital spending as a percentage of revenue.

They said further details would be provided when Thomson Reuters issues its fourth-quarter report in February. The company also expects to close a deal with the London Stock Exchange Group.

Earlier, Thomson Reuters reported a US$241 million profit for the third quarter that compared with a year-earlier loss of US$44 million.

The major sources of Thomson Reuters revenue have changed in recent years due to deal-making by the company, which at one-time owned Canada's largest newspaper group.

Thomson Reuters owns Reuters News but it is outside the company's three core business units. Its founding Thomson family controls The Globe and Mail, but through a private company separate from its stake in Thomson Reuters.

Thomson Reuters's total revenue for the third quarter, reported in U.S. currency, was US$1.44 billion, up from US$1.41 billion in the same quarter last year. Its “big three” segments accounted for US$1.13 billion of that.

Thomson Reuters said that growth in both recurring and transactions revenues was partly offset by reduced print revenue and a negative impact from foreign currency rates.

Analysts on average had expected a profit of 38 cents per share and $1.43 billion in revenue, according to financial data firm Refinitiv.

Refinitiv was previously part of a wholly owned Thomson Reuters division that has been partly spun off through a series of transactions in recent years. The London Stock Exchange Group agreed to buy Refinitiv in a US$27-billion deal announced in August 2019.