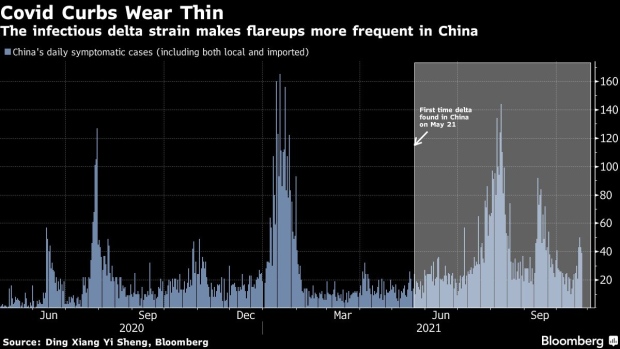 (Bloomberg) -- China has driven Covid-19 cases back to zero three times over the past five months, but outbreaks are flaring more frequently than ever before, raising questions about how long the nation can persist with a strategy that’s leaving it increasingly isolated.

The gaps between major outbreaks in China have fallen from around two months in the second half of last year to as little as 12 days since May, when the country saw its first delta cases. While China is still able to drive locally-transmitted infections back to nil, the amount of time virus-free is getting shorter, data on daily cases compiled by Bloomberg News shows.

As contagious as chicken pox, the delta variant is proving a tougher foe for China, the last country in the world to be fully committed to a Covid Zero strategy of eliminating all cases.

The latest outbreak has spread to 11 provinces and infiltrated the tightly controlled capital of Beijing. Officials are warning that the situation could get even worse and have locked down a town bordering Mongolia that has reported the most infections in this current flareup.

Once its initial outbreak out of Wuhan was quashed, China was able to go as long as two months without a major local outbreak. That allowed the world’s second-largest economy to keep factories humming, consumers spending and residents traveling within its borders. It was the only major country to post economic growth in 2020.

But relying on the same strategy to quell delta has stymied that expansion this year.

Lockdowns, suspension of air and train travel, and other measures designed to arrest the spread of delta, which reached across half the country during the summer, dented consumer spending. Subsequent flareups since then have continued to weigh on sentiment, leading to muted demand and travel activity during the normally robust National Day holiday earlier this month.

Still, the government and health authorities are showing no signs of backing away from Covid Zero, at least not before the Winter Olympics slated for February.

By doubling down on elimination, China is going against a global trend that sees co-existing with the virus and relying on vaccinations to protect against severe disease the inevitable end-game for the pandemic.

Pandemic’s Next Six Months Will Pit Vaccines Against Variants

Other countries in the region that had pursued Covid Zero are starting to pivot, with Singapore and Australia easing quarantines and New Zealand accepting its latest outbreak -- also fueled by delta -- likely can’t be brought back to zero. All have laid out blueprints for reopening to the world, which include accepting cases are here to stay.

It’s a vision China so far shows little interest in sharing, and officials haven’t yet articulated any alternate way forward.

That’s concerning investors, analysts at Natixis SA said in a note to clients at the end of September. While the Covid Zero approach has been successful in containing the virus, it makes China “increasingly exposed to long-term economic costs due to the uncertainties about how to exit,” the analysts said.

“Such uncertainty is creating higher volatility and worsening investment sentiment in recent months.”