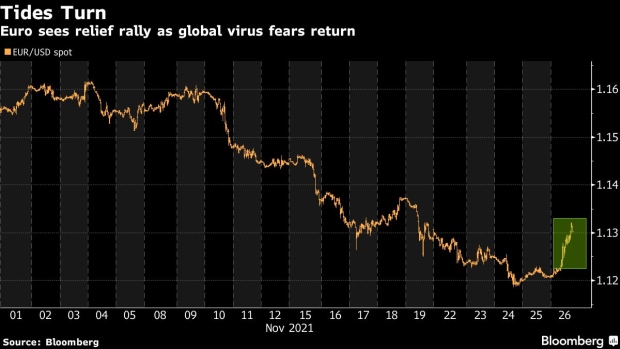 Hungarian forint banknotes notes are withdrawn from an automated teller machine (ATM) in Budapest, Hungary on Thursday, Aug. 26, 2021. Hungary’s economy shot higher by a record amount in the second quarter as the economy rebounded from its worst-ever three-month contraction during the height of the pandemic. Photographer: Akos Stiller/Bloomberg , Bloomberg

(Bloomberg) -- The new strain of the coronavirus might give the euro some pain relief.

The common currency has been battered this month as Europe looked set to be the only region heading for another winter of lockdowns, yet now fears of renewed travel curbs are spreading around the world from the latest Covid-19 variant.

Markets are already betting on a slower pace of interest-rate hikes from global policy makers. That could derail a popular trade for a slide in the euro, which has been based on other major central banks lifting rates far sooner than the European Central Bank.

The change in sentiment saw investors bid up the euro on Friday, making it a surprise winner of market turmoil, along with traditional havens such as the yen and Swiss franc. It rallied 1% to break above $1.13, recovering from a drop below $1.12 earlier in the week, leading analysts with calls for a weaker euro to reconsider their forecasts.

“We can expect some stabilization in euro-dollar for the time being between $1.12 and $1.14, if the market continues to revise their expectations for Fed rate hikes next year,” said Nordine Naam, a strategist at Natixis SA. He had previously seen the euro falling to $1.10 by the end of the year.

Investors will be watching for updates over the weekend as the World Health Organization and scientists in South Africa, where the new B.1.1.529 variant was first identified, try to ascertain how quickly it can spread and whether it’s resistant to vaccines. Traders aren’t taking chances, having dumped stocks Friday and piled into U.S. Treasuries and European bonds.

That came as money markets pushed back the timing of a first 25-basis-point rate increase by the Federal Reserve, only seeing two hikes next year. It’s a similar story in the U.K., where the Bank of England is expected to tighten policy in February, after traders cut bets on a move next month.

While the market’s expectations for a move by the ECB also took a hit, they have a lot less room to fall than the more advanced wagers in other regions. Money markets are no longer expecting an ECB increase next year, having been pricing about 20 basis points two weeks ago.

Also in the euro’s favor is market positioning. The hits to global sentiment trigger the unwinding of carry-trade positions that require buying back of funding currencies such as the euro.

Asset managers’ net positions had turned the least positive on the euro since June 2020, according to data from the Commodity Futures Trading Commission for the week through Nov. 16. Hedge funds have stayed largely underweight on the euro in recent weeks, and hence the currency was at risk of a short squeeze higher, according to Audrey Childe-Freeman, Bloomberg Intelligence’s chief G-10 currency strategist.

Not everyone is convinced this could be a turning point for the common currency. BMO Capital Markets is looking for opportunities to sell it against the dollar given Europe’s pre-existing economic problems. The outlook for Fed policy, too, is unlikely to return to its ultra-accommodative stance.

“Should we be concerned? Yes. Should we be irrational? No,” said Jordan Rochester, a currency strategist at Nomura International Plc, which has a $1.10 trade recommendation for the euro. “This will be a fade in euro-dollar eventually, perhaps next week if the spread of the variant remains low outside of South Africa.”

For now market participants are left in a similar position to earlier stages of the pandemic: studying epidemiological data to assess whether the new strain is more transmissible or lethal than previous versions, and predicting how policy makers might react.

Ima Sammani, an analyst at Monex Europe, was expecting policy divergence to leave the euro ending 2021 at $1.11, having cut her forecast from $1.15 just this week. Should cases globally rise to such an extent that other countries choose to impose lockdown measures again, the euro may close the year around the $1.12 or $1.13 level, she said.

“This scenario was a tail risk in our view but the subjective probability of it playing out has now increased due to the latest news,” said Sammami.