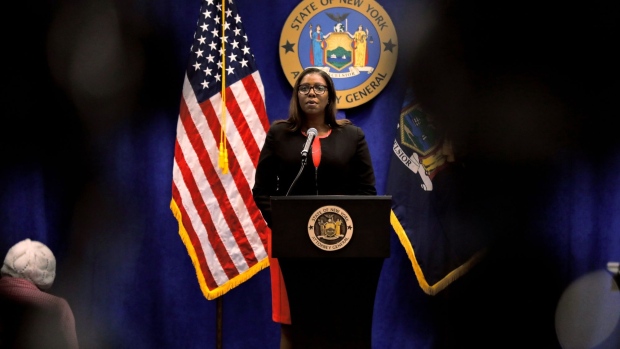 (Bloomberg) -- New York Attorney General Letitia James’s longtime chief of staff and one of her most-trusted advisers resigned after being investigated for workplace misconduct, according to a person familiar with the matter.

A law firm was hired to conduct an independent probe into Ibrahim Khan after an allegation of sexual harassment surfaced in October, said the person, who declined to describe the outcome of the probe. The investigation involved “a few” women, none of whom are current employees, said the person, who asked not to be identified discussing information that isn’t public.

In a statement to Bloomberg News, Khan, who has worked closely with James since before she was New York’s top law enforcement officer, said the law firm’s probe cleared him of official workplace misconduct, and that his resignation had nothing to do with the allegation.

“After a successful four-year term, I’ve been slated to leave the office for the private sector at the end of this year,” said Khan, 38. “This is unrelated to an investigation which, nevertheless, found no official workplace misconduct. I’m proud of all we have achieved over these past four years in serving New Yorkers.”

The resignation comes a month after James, a Democrat, was elected to a second term and about a year after her office issued a damning report on former Governor Andrew Cuomo’s conduct with women. Cuomo, who resigned over the scandal, denied wrongdoing and accused James of politicizing the investigation to advance her own career.

“The Office of Attorney General has protocols in place to thoroughly investigate any allegation of misconduct,” James’s office said in a statement. “The office takes these matters with the utmost seriousness, and this situation is no different. An independent, impartial investigation was conducted, and the employee has since resigned.”

James’s office regularly probes claims of sexual harassment by employers. In July, she reached a $500,000 settlement to resolve claims of harassment, discrimination and wage theft at a popular lower Manhattan bar, Sweet & Vicious, as part of a crackdown on mistreatment of workers in the industry.

Khan worked on Hillary Clinton’s 2007 presidential campaign before becoming a political consultant. He became James’s chief of staff when she was the New York City public advocate for five years and served as campaign manager when she ran for attorney general.

(Updates with detail about Khan in last paragraph)