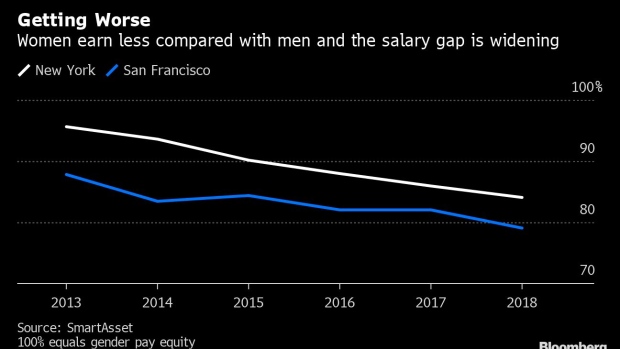 (Bloomberg) -- San Francisco and New York have created thousands of lucrative jobs in technology, but despite efforts to increase diversity in the industry, women are still being left behind.

The two cities, sometimes rivals for attracting tech talent, slid backwards in recent years on gender diversity, according to data from SmartAsset, a financial technology company that provides personal finance advice online. From 2013 to 2018 they either did worse or made little progress on women’s workforce participation in tech and gender pay gaps.

“No single city or no city’s tech sector has figured this out,” said Eli Dvorkin, editorial and policy director at the Center for an Urban Future in New York. “Tech jobs are falling behind the diversity of the workforce overall. They tend to be whiter, they tend to be much more male and typically see a notable under-representation of blacks and Hispanics.”

In the U.S., women made up about 26% of the tech workforce nationally, according to SmartAsset. But while jobs for computer and information technology workers are expected to grow by 12% overall from 2018-2028, employment opportunities for these often well-paying positions still usually favor men, according to the report released earlier this month. Racial diversity isn’t much better. In 2017, the latest year for which data is available, only about 20% of New York’s tech workforce was either black or Hispanic, and only 7.5% of San Francisco’s, according to a 2019 analysis by the Center for an Urban Future.

San Francisco and the broader Bay Area is home to many of the biggest U.S. tech companies, as well as major venture capital firms. In recent years, tech giants from Alphabet Inc.’s Google to Facebook Inc. and Amazon.com Inc. have been expanding in New York, too, adding to a burgeoning startup scene, helping technology rival finance as the city’s growth engine. But despite industry efforts to increase women in the workforce, progress in the two cities has been limited.

One of the main reasons for the lack of representation is limited access to tech skills training. New York in particular, despite having a strong pipeline of programs, is failing to reach under-served communities, according to a study by the Center for an Urban Future and Tech:NYC released Wednesday. The city’s programs focus more on basic digital skills instead of the advanced training required for tech jobs.

Part of the issue is also the high cost of living in the two cities. Women are choosing to move to more affordable cities with growing tech opportunities, according to Denise Roy-Desrosiers, managing director at the nonprofit Girls in Tech New York.

“New York has become a less friendly city for both women and men,” said Roy-Desrosiers. “Women are still being paid less to do the same jobs and so while that is still the case, women will take advantage of working in places where they can afford to live comfortably and independently.”

New York went from being the fifth-best city for women in tech in 2013 to 27 in 2018, according to SmartAsset data. The percentage of women working in tech declined to 25% from 26%, while the gender pay gap, defined as the percentage of men’s salaries women make for the same jobs, widened. Women in the industry were making 84% of what men made in 2018 compared with 96% five years earlier.

Google and other big tech companies expanding in New York represent a significant chunk of the industry’s workforce and the gender imbalance within their ranks is also making New York less like the “haven for disruption and innovative work culture that it once was,” Roy-Desrosiers said.

Still, New York does better than San Francisco on most diversity metrics. San Francisco never made it to the Top 10 best cities on SmartAsset’s list for women. It dropped to 33 in 2018 from 23 in 2013. While women’s participation in the workforce increased marginally over five years, the gender pay gap increased to 79% from 88% in the city. Topping the 2020 list of the best cities for women in tech was Baltimore, where women make up 33% of the tech workforce and their average earnings are about 94% that of men in the industry.

To contact the reporter on this story: Nikitha Sattiraju in New York at nsattiraju@bloomberg.net

To contact the editors responsible for this story: Molly Schuetz at mschuetz9@bloomberg.net, Andrew Pollack