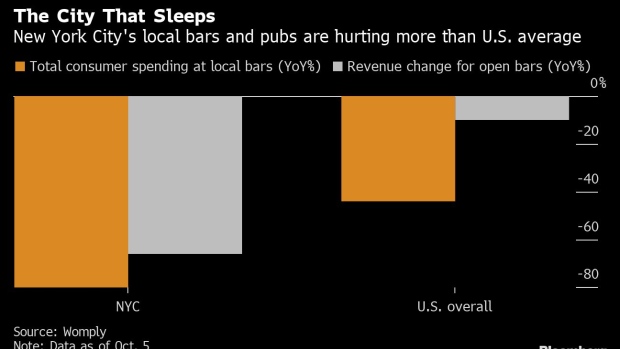 The bar area stands temporary closed to inside seating at Bloom's Tavern in New York, U.S., on Wednesday, June 24, 2020. Bars across the U.S. reeling from lost business during the coronavirus lockdown, now are grappling with the possibility of higher prices for top sellers like German ales and British gin from new proposed tariffs. , Bloomberg

(Bloomberg) -- When New York City emerges from what could be another surge in virus cases, many residents won’t even be able to celebrate at their local bar.

Recent data from Womply show that 43% of the city’s bars were closed on Oct. 5 and spending at the ones still open was down 80% from the corresponding day a year earlier. While the data only includes the single date of Oct. 5, the snapshot is representative of the overall trend this year, according to Womply, a provider of business software and services.

The numbers demonstrate how high costs and social distancing requirements -- in New York’s already famously tight spaces -- have combined to make 2020 a particularly difficult year for the city’s pubs and bars. In addition to the high cost of rent, Joaquin Simo, the owner of speakeasy-style Pouring Ribbons in the East Village, says that basic bar staples like lemons and limes can cost as much as 25% more in New York than in places like California.

“We could definitely lose three-quarters of the bars we started the year with, especially in New York,” Simo said. “Bars are a volume business; historically the busier the better.”

Womply’s data does show some recent improvement: Consumer spending on Oct. 5 was 17 percentage points higher than it was on Sept. 29. Nationally, it has trended the opposite direction.

To save the city’s nightlife industry, Simo says it needs a fundamental overhaul. Middle-men distributors, for example, could be cut out, drinks could be served from kegs and bartenders’ role could potentially be reduced.

Greg Boehm, owner of Cocktail Kingdom -- a vendor of bar accessories -- and a handful of bars in New York, sees a future in high priced cocktails.

“The focus will be on hospitality and comfort rather than getting people in and out,” said Boehm, whose establishments include Katana Kitten. “I travel extensively to Tokyo, I’ve been to hundreds of bars where there are only eight people there.”