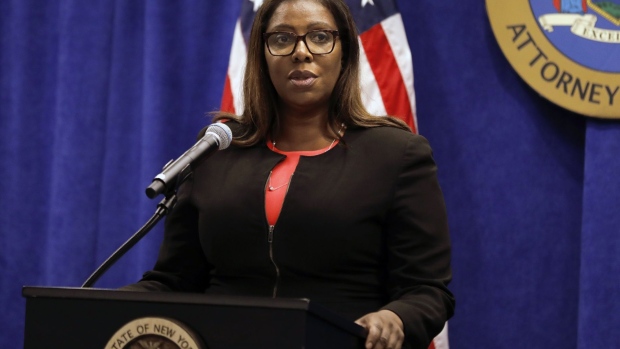 (Bloomberg) -- Authorities announced the indictment of 41 people in an alleged luxury goods theft ring in New York City that disguised the stealing as isolated “smash and grab” incidents.

New York Attorney General Letitia James and New York City Mayor Eric Adams revealed the scheme at a news conference on Thursday. They described a “massive retail theft operation” in which a team of “boosters” fanned out to lift merchandise from Macy’s, Bloomingdale’s and other stores that was then resold on eBay by the ringleader. The indictment includes charges of criminal possession of stolen property and money laundering.

James and Adams said law enforcement had seized more than $3.8 million in stolen goods from the scheme’s alleged boss, Roni Rubinov, and cited more than 550 stolen gift and cash cards. James vowed to “restore an environment where New Yorkers feel safe and secure” and to “protect businesses” in the city and “preserve the rule of law.”

Adams said the bust showed that he “will not tolerate crime -- street crime, retail crime, or organized crime.”

“This wasn’t just shoplifting, but people going into stores and clearing off shelves as part of an organized crime ring,” Adams said. In an apparent reference to past criticism of the prosecution of shoplifters, he said “this was greed” and that cracking down on it was not “criminalizing poverty.”