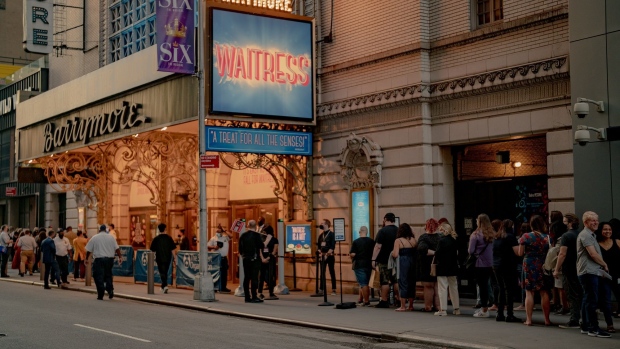 Customers in line to enter the Barrymore Theatre to see the Waitress musical in the Times Square neighborhood of New York, U.S., on Saturday, Sept. 4, 2021. This month, as Broadway theaters, Lincoln Center, and other stages reopen, New Yorkers will see if the city's famous love for the arts has held strong enough to play a starring role in its economic revival. Photographer: Amir Hamja/Bloomberg , Bloomberg

New York City should advertise its bonds in Playbill, the program distributed at all theaters as well as venues such as Lincoln Center, Carnegie Hall and the Metropolitan Opera, one firm suggested in the city’s latest Request for Proposal for Underwriting Services.

“This approach would directly target a captive and typically affluent demographic,” underwriter Rice Financial Products Co. said in its response. “Playbill is closely scrutinized by theatergoers while awaiting the commencement of a performance and during intermission.”

The average net worth of readers of Playbill “classic arts” programs distributed at venues that aren’t Broadway theaters is $1.3 million, while the average household income is $217,000, Rice said. For those distributed at theaters, the income level of readers would be just below that.

Timing is everything, as they say in the theater. The Rice response was dated Feb. 3, 2020. Just over a month later, Broadway was ordered closed by then-Governor Andrew Cuomo, a shutdown which lasted almost 18 months as the pandemic raged.

In its response, Rice said it didn’t believe that advertising had a measurable impact on demand or pricing of the city’s bonds “due to the very limited amount of ‘Mom and Pop’ retail investors. The vast majority of retail sales is through professional retail investor outlets, which get their information on upcoming bond sales through the same methods as institutional investors.”

However, advertising have other “positive attributes,” Rice added, “the primary one being that it promotes to the local population the City’s efforts to invest in City infrastructure.”

The company declined to comment on its proposal. A spokesperson for the comptroller said that office and the city haven’t advertised city bond transactions since March 2020.