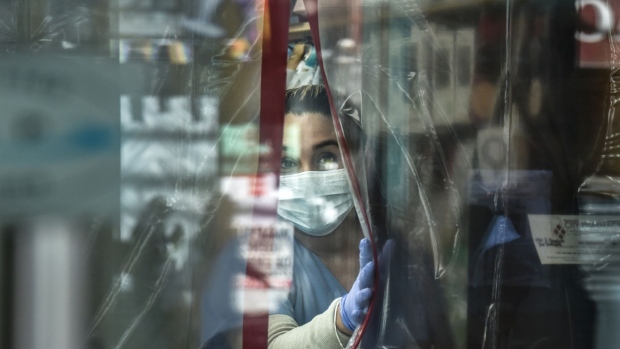 NEW YORK, NY - APRIL 1: A pharmacist works while wearing personal protective equipment in the Elmhurst neighborhood on April 1, 2020 in New York City. With more than 75,000 confirmed cases of COVID-19 and more than 1,000 deaths, New York City has become the epicenter of the outbreak in the United States. (Photo by Stephanie Keith/Getty Images) , Photographer: Stephanie Keith/Getty Images North America

New York City, once the epicenter of the nation’s coronavirus outbreak, has just reported its first day with zero confirmed or probable virus deaths since the pandemic hit New York State.

The milestone came Sunday in initial data from the New York City Department of Health and Mental Hygiene.

It marked the end of a four-month stretch since the city reported its first COVID-19 fatality on March 11. The confirmed daily death count hit its height on April 7 at 597. Another 216 people were reported likely to have died from the virus despite no positive laboratory tests that day.

“New Yorkers have been the hero of this story, going above and beyond to keep each other safe,” City Hall spokeswoman Avery Cohen said in an emailed statement.

State and local data often conflict, and numbers can change due to delays in lab results, as some deaths initially reported as probable may be later changed to confirmed.

On Saturday, an additional 341 people tested positive for COVID-19 in New York City, a rate of 1.3 per cent, according to state data. The city kicked off its Phase Three of reopening on Monday, allowing nail salons, tanning studios and dog runs to open.

Indoor dining in the city has been postponed indefinitely as other states, including Texas and Florida, have seen spikes in new cases after reopening bars and restaurants.

“In the absence of national leadership, our city has stepped up to show what it means to reopen safely,” Cohen said. “With cases surging around the country, we know we can’t let our guard down just yet, and will continue to do everything we can to fight the virus together.”

Washington D.C. has also seen coronavirus deaths slow this month. Figures released by the mayor’s office on Sunday showed no new deaths in the past three days.