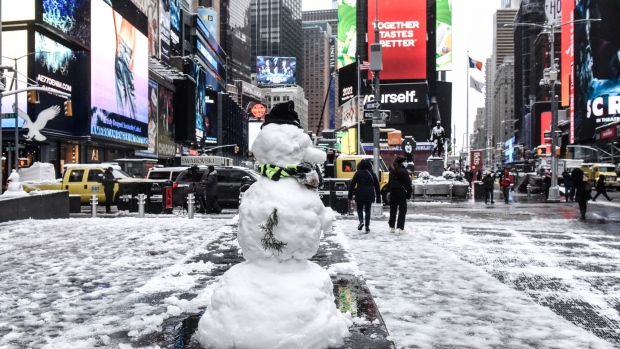 A snowman in Times Square during a snow storm in New York, U.S., on Friday, Jan. 7, 2022. New York City experienced its first snow storm of the winter season with accumulations up to four inches in midtown Manhattan. , Bloomberg

(Bloomberg) -- New York and the Northeast will receive a blast of cold air in the next few days as the potential for a winter storm sweeping the region this weekend lingers.

Temperatures will drop to 15 degrees Fahrenheit (-9 degrees Celsius) in Manhattan and Washington Wednesday night, 5 degrees in Boston and 12 in Philadelphia, according to the National Weather Service. The chill will grip the region through Thursday when conditions should begin to moderate and the stage is set for the next round of winter weather.

“There is a potential for a coastal low,” said Marc Chenard, a senior branch forecaster with the U.S. Weather Prediction Center in College Park, Maryland. “There in an increasing chance of winter impacts for Friday into Saturday, but the magnitude of those impacts are still undecided.”

The Northeast cities have lagged below normal for snowfall this year. A smattering of storms have brought a few inches to the region, but most systems have swept too close to the coast, dumping mainly rain in New York and Boston, which fell in line with pre-season outlooks from government forecasters.

Since Dec. 1, Central Park has received 7 inches (17.8 centimeters) of snow, or 4.2 inches below normal for late January, the weather service said. Philadelphia, Boston, Trenton, and Washington are all also trending below normal.

Chenard said that the exact track the storm takes on Friday into Saturday will be what determines if the cities continue to miss out on the snow. If it’s too close to the coast, then it’ll rain along Interstate 95, which links the Northeast cities. If the system is too far out at sea, then the snow will miss.

For snow lovers, the storm will have to cut a path down the middle to bring heavy snowfall to New York and other cities. For now, the details aren’t clear, he said.

Further to the west, in the upper Great Plains and Great Lakes, bone-rattling cold has also taken hold and with winds sweeping out of Canada, temperatures seem even worse. A windchill advisory has been posted from Montana to Indiana, and temperatures in Chicago could feel as cold as minus-25 degrees through Wednesday afternoon.