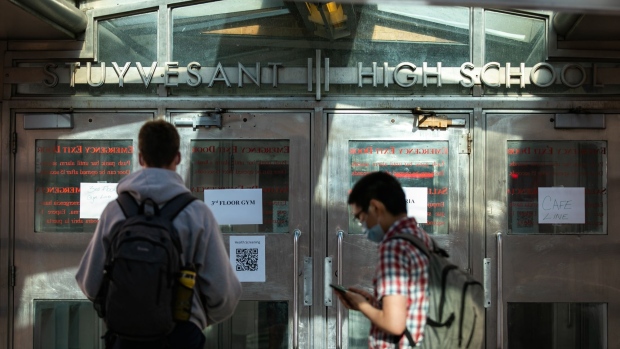 (Bloomberg) -- New York City’s admission tests for specialized high schools, scheduled for this weekend, will be delayed because of concerns about spreading the Covid-19 virus, Mayor Bill de Blasio said.

”With something like administering a standardized test, we’re in a whole different reality now because it’s hard to do it in person,” de Blasio said on Thursday, referring to the restrictions imposed by the pandemic. “In the next week or two we’re going to have updates for people on how we’re going to handle that going forward.”

The standardized tests determine who gets accepted at eight public schools offering rigorous college-preparatory and elective courses. The tests have been controversial, with educators and parents saying they shouldn’t be the only criteria upon which to base admission.

Separately, New York state’s Education Department announced Thursday it would cancel its January Regents Examination due to the coronavirus. The exams, which cover several subjects for high school and school, are given in January, June and August, and won’t be a graduation requirement this year. No decision has yet been made about the June or August exams, the department said.