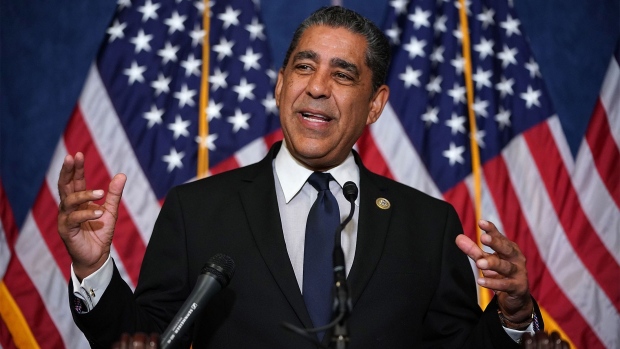 WASHINGTON, DC - OCTOBER 25: Rep. Adriano Espaillat (R-NY) speaks during a news conference with fellow Democrats, 'Dreamers' and university presidents and chancellors to call for passage of the Dream Act at the U.S. Capitol October 25, 2017 in Washington, DC. President Donald Trump said he will end the Deferred Action for Childhood Arrivals program (DACA) and has asked Congress to find a solution for the status of the beneficiaries of the program, called 'Dreamers.' (Photo by Chip Somodevilla/Getty Images) , Photographer: Chip Somodevilla/Getty Images

(Bloomberg) -- Democratic Representative Adriano Espaillat of New York said he tested positive for Covid-19 after receiving the second dose of a vaccine, and is isolating at home.

“I received the second dose of the #COVID19vaccine last week and understand the affects take time,” Espaillat said on Twitter Thursday, without identifying which vaccine he got. “I have continued to be tested regularly, wear my mask and follow the recommended guidelines.”

Espaillat, whose 13th Congressional District includes Harlem, Washington Heights and northwest Bronx, didn’t say how he was feeling. At least one other member of Congress has tested positive after getting a Covid inoculation. The office of Republican Representative Kay Granger of Texas said last week she tested positive, but at the time she had only received the first dose of the two-shot regimen.

The U.S. so far has approved two vaccines for Covid-19, one made by Moderna Inc. and the other by Pfizer Inc. and BioNTech SE. Studies show the vaccines are fully effective at one to two weeks after the second dose, depending on the vaccine. While the vaccines prevent disease, it is not clear whether they prevent asymptomatic infection.

The New York congressman -- who spoke on the House floor Wednesday and voted to impeach President Donald Trump -- also didn’t disclose when or where he may have contracted the coronavirus. His office didn’t immediately respond to a request for comment.

Several House Democrats were infected after they had to take shelter during last week’s attack on the Capitol. They have rebuked their Republican colleagues for not wearing masks and introduced rules to enforce face coverings.

(Adds effectiveness of vaccines in fourth paragraph, other infections in sixth.)