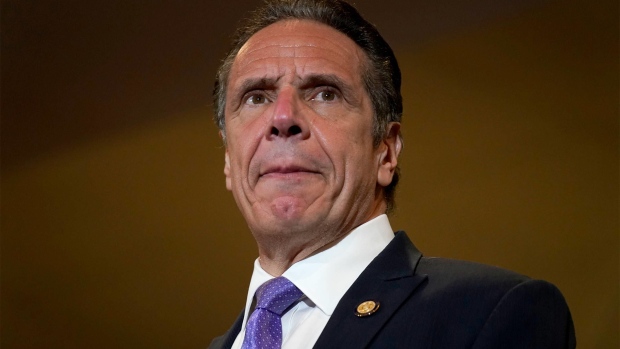 NEW YORK, NEW YORK - MARCH 22: New York Governor Andrew Cuomo speaks at Grace Baptist Church, a new pop-up vaccination site, in Mt. Vernon, New York on March 22, 2021 in New York City. Cuomo was there to encourage all people to get vaccinated, especially those in underserved communities that were the most effected by the pandemic. (Photo by Seth Wenig-Pool/Getty Images) , Photographer: Pool/Getty Images

(Bloomberg) -- The head of New York’s Democratic Party said Wednesday that he had urged Governor Andrew Cuomo to step down over sexual misconduct allegations in an explosive report that was released a day earlier.

“I think he’s going to hold a press conference in the next day or so to lay out his views on these allegations and he’s got a different view,” said Jay Jacobs, who was chosen by Cuomo as party chairman and had been supportive as scandal churned through the administration. “So I think he’s going to do that and we have to hear from him.”

At stake, Jacobs said, were elections next year for Congress, the State Senate “and local races that count.” There will also be a gubernatorial election in 2022, and Cuomo, now in his third term, has been holding fundraisers.

State Attorney General Letitia James said Tuesday that an investigation she led found that the governor had violated state and federal laws against sexual harassment and a toxic work environment. After her report, which outlined 11 cases of harassment by women who had worked with Cuomo, was made public, President Joe Biden and other prominent Democrats called on him to step down.

At the same time, impeachment proceedings are underway in the State Legislature.

“I suggested this is the right time to resign because I didn’t see anything getting better,” Jacobs added. “I said to him, ‘the toothpaste is out of the tube’ meaning the political support has left and I don’t see him getting it back. Now is the time to resign, and he has to make that judgment. That’s up to him.” Jacobs declined to disclose what Cuomo said to him.

Asked if the governor seemed angry, Jacobs replied, “I did not detect anger. I voiced my friendship. I think he was disappointed.”