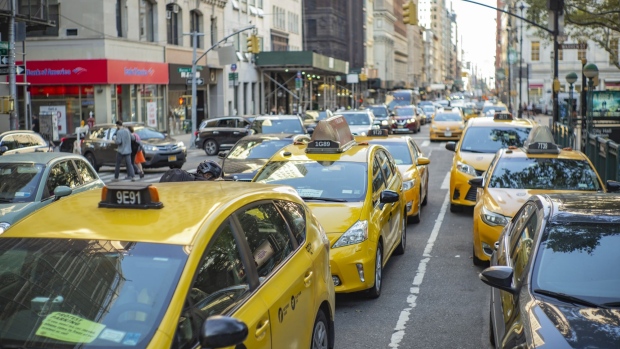 (Bloomberg) -- New York Governor Kathy Hochul on Thursday announced that the state will follow California in requiring all new vehicles sold by 2035 be zero-emissions, setting in motion the regulatory process to implement a law she signed last year.

The announcement comes one month after The California Air Resources Board voted unanimously to adopt Advanced Clean Cars II, which mandates 100% zero-emission and hybrid plug-in vehicle sales in California by 2035. That plan, with an initial goal of 35% sales by 2026, would achieve goals from a 2020 executive order from Gov. Gavin Newsom, a Democrat. It is expected to ultimately be adopted by the 15 states currently signed onto California’s zero-emission vehicle program, New York among them.

As of 2020, there were 103.8 million passenger vehicles registered in the US, including commercial vehicles and taxicabs. New York and California together accounted for just over 18 million of them, or almost 18% of the total.

Hochul first announced New York’s 2035 deadline in September 2021, but the state couldn’t begin implementation until California finalized its own ban. That’s because the 1970 Clean Air Act authorizes California to set its own emissions standards on new vehicles, but other states can only follow California’s lead, and only if their proposed standards are identical.

“We had to wait for California to take a step because there’s some federal requirements that California had to go first,” Hochul said in a press conference on Thursday. “That’s the only time we’re letting them go first.”

Also on Thursday, Hochul announced a $10 million expansion of New York’s electric vehicle rebate program, which allows rebates of up to $2,000 for the purchase of an EV and has to date issued 78,000 rebates. The state will also receive $175 million in federal funding over five years to expand its charging network.

Across the US, the pace of EV adoption is expected to pick up rapidly over the next few years, as municipalities set their own deadlines for winding down gas-powered car sales, and as consumers take advantage of incentives provided by the Inflation Reduction Act. Prior to the passage of the IRA, BloombergNEF, a clean energy research group, estimated 43% of passenger cars sold in the US would be electric by 2030. With the climate-spending measure in place, that estimate was recently revised upwards to 52% EVs by 2030.

Between now and then, adoption will be heavily impacted by the price and availability of electric cars. In the first half of 2022, only 4% of the cars coming out of American factories were electric, and in July there was a 29% gap between the average US starting price for a battery-powered vehicle — the figure shown in car commercials and marketing materials —and the average sticker price for EVs that were actually made and shipped to dealerships. In other words, EVs in the US right now are still difficult to find and to afford.

The other hurdle to more widespread EV adoption is the availability of public charging stations. Earlier this year, Hochul announced the installation of 10 fast chargers at Port Authority and LaGuardia Airport, as well as plans to add more than 100 high-speed charging ports across the state.