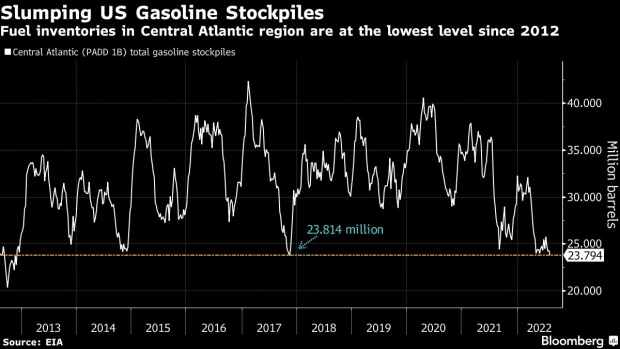 A driver fuels a vehicle at a gas station in New York, U.S., on Tuesday, May 17, 2022. From record prices to blowout spreads and falling stockpiles, a handful of financial and physical indicators are pointing to expensive and possibly tighter gasoline markets across the US this summer. , Bloomberg

(Bloomberg) -- The wholesale cost of gasoline in New York surged more than 40% against futures after regional supplies sank to the lowest level in a decade, raising the risk of shortages.

Gasoline stockpiles in the central East Coast region are at the lowest absolute level since November 2012, according to Energy Information Administration data. Seasonally, supplies are near an all-time low in records going back to 1993. The premium for New York gasoline on the spot market -- where wholesale prices are determined -- jumped by 10 cents Wednesday. Only San Francisco has more expensive wholesale gasoline.

Low gasoline supplies in region can have an outsized global impact because New York Harbor is home to physical deliveries of futures contracts that underpin trade flows around the world. A fuel tanker moving from India to Brazil, for example, is likely priced against the New York futures benchmark. So shortages in this key region that cause prices to spike would also impact prices elsewhere.

Supply has tightened amid a rebound in demand, a drop in European gasoline imports and continued cargo diversions away from the region. This offset production efforts from East Coast refiners -- all of them in the Central Atlantic region -- who operated at 100.4% of nameplate capacity last week, the highest on record.

Gas station fuel sales have been rising over the past few weeks, according to data from price reporting agency Opis and retail tracker Gasbuddy. The implied demand figure from the EIA has been more volatile than usual in recent weeks, according to analysis from BloombergNEF, but the latest weekly jump should help further bolster retail volumes.

Diesel supply remains dire as well, with seasonal distillates stockpiles languishing at the lowest level ever since March in records going back to 1993. The tightness will start to be felt when the weather turns. The US northeast is the only region in the country where the majority of home and commercial heating comes from burning fuel.

(Updates with market reaction in headline, first and second paragraphs)