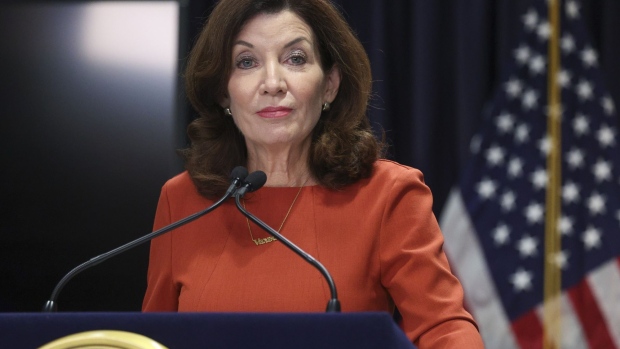 Kathy Hochul, governor of New York, during a news conference in New York, U.S., on Monday, Sept 30, 2021. A Covid-19 vaccine mandate for health workers that went into effect this week is working to boost vaccination rates, providing a road map to other states that are trying to fight the highly transmissible delta variant. Hochul said this week. , Bloomberg

Hochul, who took office in August after former Governor Andrew Cuomo resigned amid sexual-harassment allegations, has long been a prodigious fundraiser. She originally planned to collect at least $10 million by the end of 2021 and roughly $25 million by summer of 2022 to intimidate challengers as she tries to become the first woman to win the office outright. Her ahead-of-schedule take dwarfed the otherwise respectable fundraising of some likely Democratic primary and general election competitors.

In all, Hochul racked up more than 7,000 separate donations in the less than five months she’s been in office. Nearly 1,600 came in amounts of $5,000 or more. Small-dollar donors contributed less than 1% of Hochul’s total.

Hochul’s efforts highlight potential conflicts of interest in raising money from people and interests with business before the state. Las Vegas Sands, whose chief executive has spoken of plans to bid for a New York City casino if the state approves new downstate licenses, donated $5,000. Nursing-home operators, whose industry has come under heavy scrutiny amid the pandemic, contributed about $40,000.

“Governor Hochul is proud of the fact that her bold agenda to move New York forward has resonated with a diverse coalition of supporters,” campaign spokesperson Jerrel Harvey said in an emailed statement. “In keeping with the governor’s commitment to maintain high ethical standards, campaign contributions have no influence on government decisions.”

Hochul’s fundraising roughly quadrupled that of Democratic U.S. Representative Tom Suozzi of Long Island. Suozzi’s campaign reported raising $5.46 million and has $5.25 million in cash on hand. Hochul raised almost 10 times more than New York City Public Advocate Jumaane Williams, another likely primary challenger. He reported donations of just $221,996 over the past six months. His campaign has $189,221 in cash on hand.