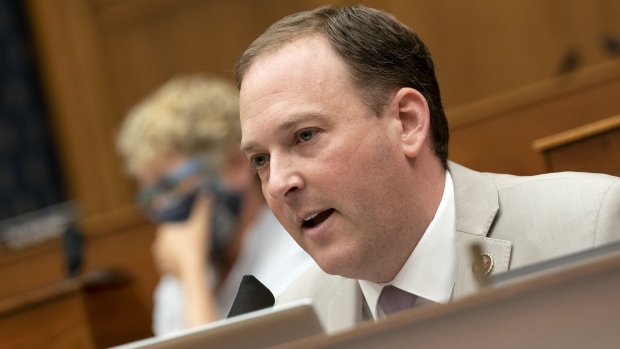 Kathy Hochul, governor of New York, speaks during a ribbon cutting ceremony for Delta Air Lines Terminal C at LaGuardia Airport (LGA) in the Queens borough of New York, US, on Wednesday, June 1, 2022. Delta Air Lines said it will trim about 100 flights a day in the US and Latin America from July 1 through Aug. 7 to help it recover faster from bad weather, higher-than-expected worker absences and other issues that have rattled recent operations. , Bloomberg

Heading into the midterm elections, there’s a rising national wave of push back against Democrats in elected office. Inflation is soaring and gun crime is up. New York is a reliably blue state -- a Republican hasn’t won a statewide election in 20 years -- but Hochul, 63, has been saving her campaign funds for a general election where polling shows she isn’t a shoo-in.

U.S. Representative Lee Zeldin of Long Island is the front-runner among Hochul’s Republican challengers, according to limited polling. A June 16 Siena poll found that 46% of New York voters polled said they would prefer Hochul, while 44% said they would prefer to elect someone else. The poll didn’t ask voters about a head-to-head contest.

Competitive Republican challenges to incumbent Democratic governors have become a rarity in New York since George Pataki won his third term as governor in 2002. And the differences between Hochul and her potential Republican general election challengers are starker than ever -- especially following the Supreme Court’s decision Friday to overturn Roe v. Wade.

“Most of her opponents don’t believe the 2020 election was legitimate,” Greer said. “We’ve got two extremes of the ideological spectrum on the ballot.”

During a campaign stop in New York City on Monday, Hochul said it may appear like she is saving her firepower for the November election, rather than the primary election, because she has been “busy governing.” She also said the court’s abortion decision raised the stakes for the election.

“I’m the one who can stand between us and chaos if a Republican ever sits in the state house in the governor’s seat,” she said while her supporters handed out flyers to voters in Harlem. She said her Republican contenders are “dead set on standing with the Supreme Court” and voters “need to know that electing the Democrat that is certain to win in November is critically important.”

Zeldin, who is considered the GOP front-runner, pushed back on Hochul’s assertions and said the math might favor Republicans this year.

“Oftentimes, when people analyze the electorate in New York, they look at how many more Democrats there are than Republicans and then that’s the end of the analysis,” Zeldin said in an interview with Bloomberg News on Friday. “There are millions of voters who aren’t Republican or Democrat. In a year like 2018, they swung left. In a year like 2022 they are swinging right.”

In New York, there are roughly 6.5 million Democrats and 2.8 million Republicans out of nearly 13 million enrolled voters, according to the New York State Board of Elections.

Hochul’s path to a primary victory wasn’t always as clear as it is now. She had faced the possibility of a larger primary field, including Attorney General Letitia James. James could have siphoned off liberal, downstate and Black voter support from Hochul, a Buffalo native who initially had low name recognition in vote-rich areas like New York City.

But Hochul is a prodigious fundraiser who built up a multimillion-dollar war chest and has drastically out-raised and outspent her primary opponents. She still has the most cash of any candidate, of any party, as she heads into a likely general election contest in November.

Hochul’s campaign has reported $34 million in contributions and $23.2 million in expenditures since August 2021, state campaign finance records show. During that period, Williams raised $528,358 and spent nearly $390,000, while Suozzi raised $7.4 million and spent $7.8 million.

In the wake of the Supreme Court’s abortion decision, Hochul has been running ads highlighting her support for abortion rights and access, in contrast to her Republican challengers. And she spent much of the televised primary debates highlighting legislative achievements on gun control.

“Governor Hochul has built a battleship of a campaign,” said Democratic political strategist Eric Koch, founder of communications firm Downfield Strategies. “Coming out of the primary she’s going to have a lot of momentum against the Republicans who have been forced to compete over who loves Donald Trump the most.”