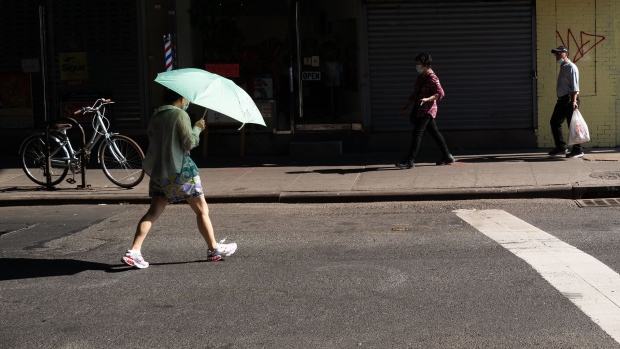 (Bloomberg) -- Power demand in New York City is expected to hit the highest for the summer on Tuesday as a stifling heat wave reaches its peak.

The load on Consolidated Edison Inc.’s system is expected to reach 11,900 megawatts sometime this evening, just short of last year’s summer high of 12,065 megawatts, according to spokesman Allan Drury. The New York-based utility is asking almost 150,000 customers in Queens and the Bronx to conserve power as it makes repairs.

Tuesday’s temperatures will reach mid 90s Fahrenheit from Washington to Boston before cooling rains and a cold front bring relief to the Northeast, said Frank Pereira, a meteorologist with the US Weather Prediction Center. A heat advisory is in effect until at least 7 p.m., according to the National Weather Service.

“Today is going to be the worst of it,” Pereira said. “We’ll have below-normal temperatures by the end of the week.”

ConEd has reduced voltage by 8% in parts of Queens and the Bronx and is asking people to refrain from using power-hungry appliances like washing machines and microwaves. The company’s grid covers New York City and Westchester County.

Power consumption in the region is expected to drop off for the rest of the week with lower temperatures.

Cool air will start to sweep in from New England by the end of the day, with a secondary cold front approaching from Canada and the Great Lakes expected to reach the Eastern Seaboard in a few days, Pereira said. Friday’s high in New York will be about 81 degrees Fahrenheit (27 degrees Celsius).

Part of the reason the heat wave has felt so oppressive is that overnight temperatures have been well-above normal -- in the mid- to upper 70s. That can tax both people and infrastructure.

“There’s really no recovery overnight, which we all need,” Pereira said.