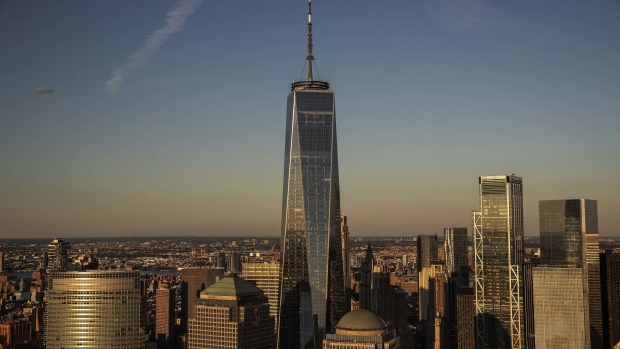 (Bloomberg) -- A state agency approved $700 million in bonds to refinance debt used for One World Trade Center, the tallest building in New York City, located on the site of the towers destroyed on Sept. 11, 2001.

New York Liberty Development Corp., created in 2002 to help rebuild lower Manhattan after the terrorist attacks, plans to issue the bonds this month on behalf of the Port Authority of New York & New Jersey. Proceeds will redeem securities sold in 2011 to help finance the 1,776-foot structure. Siebert Williams Shank & Co. and Goldman Sachs Group Inc. will manage the deal.

Separately, the agency approved developer Larry Silverstein’s selection of Goldman to manage a $525 million refinancing for nearby 7 World Trade Center. The building opened in May 2006, the first in the new complex. Silverstein last refinanced the municipal bonds for the 52-story building in 2012. The date of the bond sale wasn’t immediately available.

Market prices for trophy office buildings in lower Manhattan have suffered more than those in midtown during the coronavirus pandemic. The valuation of the World Trade Center complex and Goldman’s headquarters at 200 West Street fell by about 23%, compared with a 14% median decline for landmark buildings in midtown for the fiscal year beginning July 1, according to the city’s Department of Finance.

One World Trade had leased about 90% of its 3 million square feet of commercial office space as of March 31, according to an April Port Authority bond offering document. 7 World Trade Center was 95% occupied as of Sept. 30, according to a quarterly management report from Silverstein Properties.