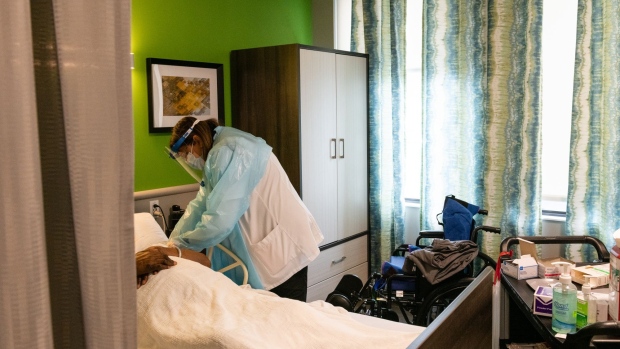 (Bloomberg) -- New York lawmakers will seek to curb the sweeping emergency powers afforded to Governor Andrew Cuomo in the wake of the Covid-19 pandemic after backlash widened over how his administration handled nursing-home deaths.

Democratic leaders in the state Senate said late Wednesday that they plan to put out a proposal that would curtail some of Cuomo’s powers ahead of a planned April 30 expiration of the law, which was passed last March and gives Cuomo a blank check to issue by executive order any directive necessary to respond to the health emergency. The state enacted the law just as the state’s second confirmed Covid case was reported in Westchester last March.

The proposal could be voted on as early as next week and could include setting up an advisory panel to approve Cuomo’s directives, according to the office of the Senate Majority. It’s unclear whether the Democrats in the state Assembly will back the measure as well. Without support in that chamber, the Senate’s one-house bill would effectively serve as a slap on the wrist.

“I think everyone understands where we were back in March and where we are now. We certainly see the need for quick response, but also want to move toward a system of increased oversight, and review,” said Senate Majority Leader Andrea Stewart-Cousins. “The public deserves to have checks and balances.”

Taking away Cuomo’s additional executive powers before they expire would be largely symbolic, viewed as a check on the outsize power Cuomo has wielded that critics say allowed him to conceal data around how many Covid deaths were tied to nursing homes. The law also gave Cuomo the power to suspend local laws during the emergency if they were found to hinder or delay necessary action, according to the bill language.

‘Vote of No Confidence’

“It would be a symbolic statement like a vote of no confidence,” said Gerald Benjamin, a political science professor at the State University of New York at New Paltz.

Benjamin said Cuomo’s additional powers were always meant to end at some point, otherwise if they last too long and the Legislature doesn’t reassert its own power, “you tend to normalize them,” he said.

While state lawmakers had the ability to end any executive orders through a joint resolution, the majority-Democrat legislature hasn’t challenged Cuomo’s pandemic actions. Some Democrats have discussed using emergency powers as leverage in negotiations for passing the state budget for fiscal 2022, which begins April 1.

A spokesperson for Cuomo referred to the governor’s comments during a Monday press briefing, in which Cuomo said that “emergency powers have nothing to do with nursing homes.” Cuomo said that he’s “taken hundreds of actions. The Legislature can reverse any action that I take, not even by a bill, just passing 50% of the Assembly and the Senate. They have never reversed a single action.”

More than a dozen senators, including Health Committee Chair Gustavo Rivera and Aging Committee Chair Rachel May, called for a repeal of Cuomo’s emergency powers last week after leaked recordings emerged of his top adviser admitting to state lawmakers that the administration withheld nursing-home data from them.

“While Covid-19 has tested the limits of our people and state –– and, early during the pandemic, required the government to restructure decision making to render rapid, necessary public health judgments –– it is clear that the expanded emergency powers granted to the Governor are no longer appropriate,” the 14 senators said in a Feb. 12 statement.

On Jan. 28, state Attorney General Letitia James released a damning report that said Cuomo’s guidance on admitting coronavirus patients to nursing homes may have put healthy residents at risk. The state has since released data revealing thousands of nursing home deaths that occurred in hospitals or outside the homes. More than 12,000 patients from nursing homes, assisted living and adult care facilities have died since March, according to Feb. 9 state data, about one-third of the total.

Cuomo, for the first time since the controversy began, acknowledged his mistakes in the handling of the data in a Monday virus briefing. “The void we created allowed disinformation, and that created more anxiety for the families of loved ones,” Cuomo told reporters.

Removing Cuomo’s emergency powers would also give state lawmakers and local leaders greater control over the pandemic response, curtailing many of the sweeping directives governing the opening and closing of businesses, schools and other mandates that have emanated from the governor’s office over the last year. A change in authority could mean a slower reaction time when dealing the pandemic response, because new legislation would have to be approved by the state senate, assembly, and the governor before becoming law.

When the legislation was passed in March, the New York Civil Liberties Union said expanding the emergency powers of a governor should “never be taken lightly,” and warned of the potential consequences. It pointed to a “drastically expanded” anti-terrorism law the state Legislature approved after the 9/11 terrorist attacks, which was also used to make other prosecutions easier, the nonprofit said in a March 2 statement. “We should not repeat the mistakes of 20 years ago.” The ACLU has sued Cuomo over his directives placing restrictions on religious ceremonies, protests, and other gatherings, which the group says infringes on residents’ first amendment rights.