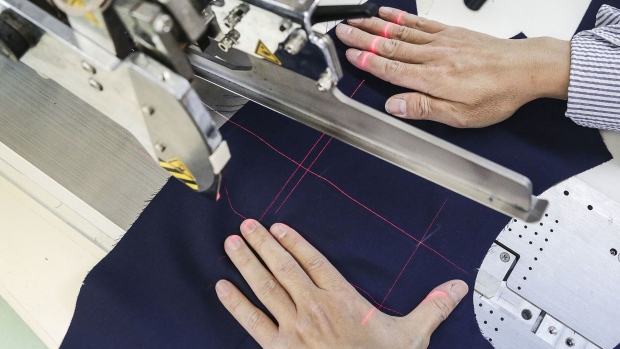 An employee measures a pocket on a blazer at the Ferrara Manufacturing Co. clothing factory in the Garment District of New York. , Photographer: Jeenah Moon/Bloomberg

(Bloomberg) -- New York state manufacturing activity unexpectedly contracted in May for the second time in three months, reflecting plunges in orders and shipments.

The Federal Reserve Bank of New York’s general business conditions index dropped over 36 points to minus 11.6, a report showed Monday. Figures less than zero indicate contraction and the May print fell short of all estimates in a Bloomberg survey of economists. The figures have been volatile in recent months, with the May figures following a growth surge in the prior month.

The New York Fed’s data are the first of several regional Fed manufacturing numbers set for release over the coming weeks. Similarly disappointing figures may further stoke concerns about a slowdown in economic activity.

The group’s gauge of new orders dropped nearly 34 points in May to minus 8.8, and the shipments measure fell at the fastest pace since early in the pandemic, sinking about 50 points.

The prices paid index fell from a record high last month to a still-elevated 73.7. The gauge of prices received also eased, signaling persistent and substantial price increases in both input and selling prices in May. The group’s employment index rose.

While expectations of general business conditions in six months improved slightly from the prior month, the gauge remains well below levels seen toward the end of 2021.