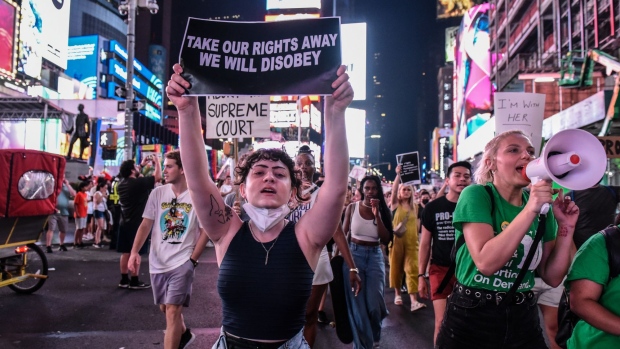 Abortion rights demonstrators hold signs while walking through Times Square during a protest in New York, US, on Friday, June 24, 2022. A deeply divided US Supreme Court overturned the 1973 Roe v. Wade decision and wiped out the constitutional right to abortion, issuing a historic ruling likely to render the procedure largely illegal in half the country. , Bloomberg

(Bloomberg Government) -- New York lawmakers on Friday are poised to take the first step towards codifying reproductive rights into the state’s constitution in response to the U.S. Supreme Court’s abortion ruling.

The measure (S. 51002) would expand the list of classes protected by the state’s constitution. If the proposal survives its next steps, voters as soon as next year would get a say on barring discrimination based on race, color, ethnicity, national origin, age, disability, creed, religion, or sex, including pregnancy, pregnancy outcomes, reproductive health care and autonomy, sexual orientation, gender identity, and gender expression.

The amendment aims to prohibit discrimination that results from the actions of state government, corporations or institutions, according to the bill text.

The high court in a 5-4 decision on June 24 overturned the landmark 1973 Roe v. Wade decision that established abortion rights.

The state Senate and Assembly are set to take up the amendment in a special session Friday. It still must be approved by another session of the Legislature. If that happens in 2023, the question could go on the ballot as soon as next fall.

To contact the reporter on this story: Keshia Clukey in Albany, N.Y. at kclukey@bloomberglaw.com

To contact the editors responsible for this story: Katherine Rizzo at krizzo@bgov.com; Fawn Johnson at fjohnson@bloombergindustry.com