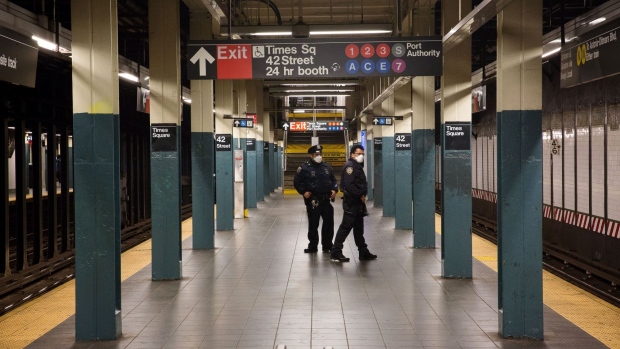 (Bloomberg) -- New York’s Metropolitan Transportation Authority is seeking additional police officers for its subways and buses as the transit agency plans to increase service once the city begins to reopen next week.

The MTA, the largest public transportation system in the U.S., wants a greater police presence to ensure people are wearing masks and practicing social distancing when possible, according to a letter the agency sent on Tuesday to Mayor Bill de Blasio. The MTA is asking the city for 1 million masks and 3,000 volunteers to help provide face covers for those who don’t have them.

The request comes as the city is reeling from protests over the death of George Floyd that have turned into rioting and looting, prompting the city to impose an 8 p.m. curfew.

“Given the anguish and chaos the city has experienced over the last week, the MTA is requesting the city deploy additional NYPD immediately to the subway to ensure the safety and security of the system,” Pat Foye, the MTA’s chairman and chief executive officer, said in the letter. “We want to make sure our system is safer than ever for riders.”

New York City, the epicenter of the coronavirus pandemic in the U.S., still plans to begin reopening on June 8 even with the disturbances, de Blasio said Tuesday.

“We’re encouraged by the steps forward outlined in the letter and we’re reviewing the specific requests they put forward,” Mitch Schwartz, a de Blasio spokesman, said in an email.

New York Police Department officers have been helping MTA riders to comply with the transit system’s mandatory face mask policy while it runs on a reduced service schedule. There are more than 2,700 officers in the NYPD Transit Bureau.

The MTA plans to restore subway and bus service to full, regular service by the start of the city’s reopening, according to the agency’s letter. While face masks are mandatory on the system, the MTA does not support arresting those without a mask.

“We have directed the MTA PD to enforce this measure, but we do not support the arrest of those who are not wearing masks, and we do not believe summonses or tickets should be written,” Foye said in the letter.

The MTA will continue to encourage ridership for essential workers and important trips such as medical appointments. It’s encouraging residents to work remotely and asking businesses to stagger work shifts.