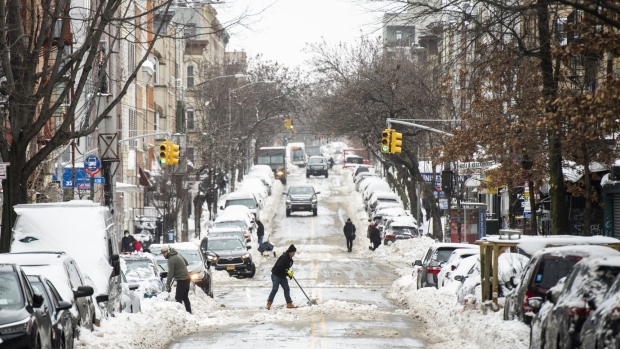 (Bloomberg) -- The chances are rising a powerful storm will sweep the Northeast of the U.S. late Friday into Saturday, bringing heavy snow, rain and winds and potentially disrupting air, rail and road transportation as far south as New York and New Jersey.

The seed of the storm will be making its way into the Pacific Northwest on Wednesday, and then drive across the U.S. and Canada, where it will interact with frigid air driving wind chills in Chicago down to minus 25 degrees Fahrenheit (-32 Celsius), according to the National Weather Service. It will then build itself into a nor’easter Friday afternoon off the East Coast and intensify so rapidly it could become a so-called bomb cyclone.

“It is definitely a concern for us,” said Alyson Hoegg, a senior meteorologist with AccuWeather Inc. in State College, Pennsylvania. “When it forms off the southeast coast, it is going to rapidly strengthen.”

The Northeast has lagged below normal for snowfall this year, so the storm has the potential to be the biggest in the region this season. Since Dec. 1, Central Park has received 7 inches (18 centimeters) of snow, or 4.2 inches below normal. Boston, Philadelphia and Washington are all running behind average as well.

A storm undergoes a rapid shift known as bombogenesis if its central pressure drops by 24 millibars in 24 hours. Meteorologists often refer to this process as a storm “bombing out.”

While computer forecast models are calling for heavy snow across New England, there is a chance it could also pile up from Washington to New York and along the Interstate 95 corridor, said Rich Bann, a forecaster with the U.S. Weather Prediction Center in College Park, Maryland.

Meteorologists will have a clearer idea in the next day or so because the energy coming off the Pacific will be sampled by weather balloons and other observations, Bann said. This increases the accuracy of the forecast as the system moves east.

Confidence is growing New England will receive heavy snow and high winds, but there is a chance that rain could wrap in along the coast keeping totals down, Bann said. There is less confidence for the forecast from New York south.

“There is a whole lot of uncertainty,” Bann said. “It will depend on where it develops and when it develops.”