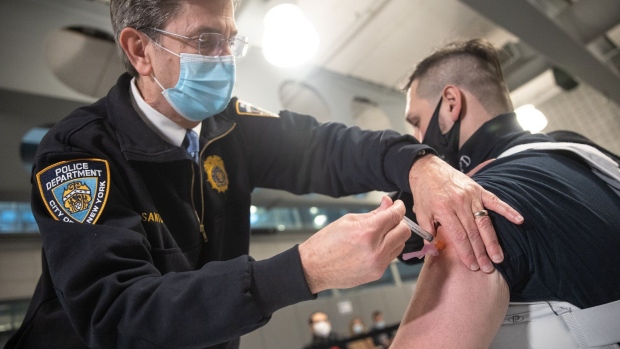 A member of the New York Police Department (NYPD) receives a dose of the Moderna Covid-19 vaccination at Queens Police Academy in the Queens borough of New York, U.S., on Monday, Jan. 11, 2021. New York City Mayor Bill de Blasio reaffirmed his goal of doling out 1 million Covid-19 doses by the end of January. , Bloomberg

The mandate was “far broader and more coercive” than similar measures taken by the federal government and other states and municipalities at a time when covid infection rates are declining, the Police Benevolent Association of the City of New York Police said in a lawsuit filed Monday in state court in Staten Island.

“The city has provided no explanation, much less a rational one, for the need to violate autonomy and privacy of NYPD officers in such a severe manner, on the threat of termination,” the union said.

The city’s Law Department did not immediately respond to a request for comment on the suit.

De Blasio said last week that the city will begin bargaining with municipal unions about how to respond to the impact of the mandate and how to get shots to about 46,000 unvaccinated employees.

Workers who refuse will be placed on unpaid leave, while employees who get their first shot at a city-run site will receive an extra $500 in their paycheck. The benefit, which the city expects will cost as much as $23 million, will end on Oct. 29. That’s the deadline for employees to submit proof they have received at least one dose.

Hours after the mandate was announced, the union, which represents 24,000 uniformed cops, pledged to challenge the requirement in court.