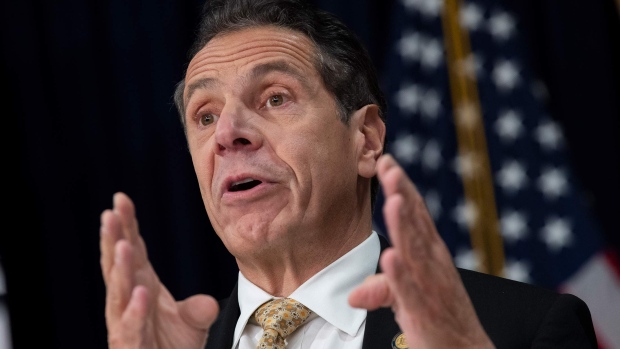 NEW YORK, NY - NOVEMBER 13: New York Governor Andrew Cuomo speaks during a press conference to discuss Amazon's decision to bring a new corporate location to New York City, November 13, 2018 in New York City. Amazon announced earlier in the day that it has chosen Arlington, Virginia and Long Island City in Queens as the two locations, which will both serve as additional headquarters for the company. Amazon says each location will create 25,000 jobs. (Photo by Drew Angerer/Getty Images) , Photographer: Drew Angerer/Getty Images

(Bloomberg) -- New York Governor Andrew Cuomo is rallying a team of governors from fellow high-tax states to push Congress to repeal the cap on deductions for state and local taxes -- an effort that looks doomed to fail.

Eight Democratic governors are banding together to pressure House Speaker Nancy Pelosi to bring up legislation that would eliminate the part of the 2017 Republican tax overhaul that limits how much of their state and local taxes people can write off their federal filing.

The SALT change was a “declaration of an economic civil war between Democratic states and Republican states,” Cuomo said on Friday.

The push comes as taxpayers are filing for 2018, the first year under the new tax guidelines, and many are getting a nasty surprise. The law set a $10,000-a-year cap on deductions for state and local taxes, including property taxes. For many taxpayers in states like New York, New Jersey and California, high state tax rates and expensive housing markets can push state and local tax levies well above that threshold.

Some taxpayers are finding a bigger tax bill as a result of the SALT deduction cap, said tax lawyer Richard Levine, who advises high-net worth clients in Connecticut for the law firm Withersworldwide LLP.

“A bunch of accountants are going to have their waiting rooms full of wealthy clients with pitchforks on April 15,” he said.

Cuomo met with President Donald Trump last week about revising the SALT cap. Trump earlier this month he was “open to talking about” changes to the provision, but offered no assurances he would back any SALT changes.

The New York governor said he doesn’t want to raise taxes to fill a $2.3 billion hole in the state’s personal income tax revenue.

“The last thing you want to do is raise taxes," Cuomo said. “You have to find cuts in very, very tight budgets.”

The legislative outlook is also unclear. The governors said they plan to work with Congress to move legislation that would remove the deduction cap. New York Representatives Peter King, a Republican, and Tom Suozzi, a Democrat, have pushed a bill to restore the tax break, as has New Jersey Democratic Representative Bill Pascrell.

But changing the tax deduction cap -- which would cost about $620 billion, according to the Urban-Brookings Tax Policy Center -- would primarily benefit taxpayers in the Northeast and California, making this a low priority for Democrats from other states.

Any action would end in the House -- Senate Finance Committee Chairman Chuck Grassley, whose Iowa constituents have generally far lower tax bills, has said he won’t address the issue.

The loss of state and tax deductions hasn’t stopped some states from continuing to raise their taxes. New Jersey raised taxes on top earners in 2018, as well as increased taxes on gasoline and businesses. Property taxes, levied by local jurisdictions, have also been rising.

--With assistance from Stacie Sherman.

To contact the editors responsible for this story: Wendy Benjaminson at wbenjaminson@bloomberg.net, Ros Krasny