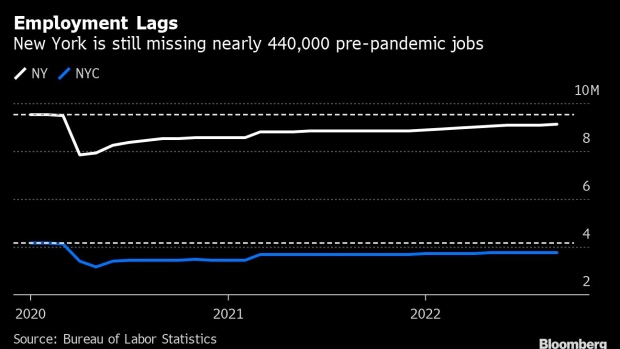 As she enters her first full term in office, the state faces a vastly different economic picture than when Hochul took over in August 2021, following Andrew Cuomo’s resignation.

Amid falling unemployment and easing Covid restrictions at the time, Hochul pushed through the state’s largest-ever spending plan and bolstered its rainy-day fund with limited political concessions, thanks to higher-than-anticipated tax revenue and billions in federal stimulus funds.

Her upcoming budget, however, will be crafted as revenue slows, federal aid starts to run out and demand for social services rise amid what most economists predict will be a near-certain recession.

Meanwhile, she will have to address crime concerns across New York, an issue that dominated the race for governor and led to a tougher-than-projected contest between her and Zeldin, who conceded in a tweet Wednesday afternoon.

“As soon as there’s a real recession, this governor is going to have a mess,” said E.J. McMahon, founding senior fellow with the Empire Center for Public Policy, a fiscally conservative think tank.

Hochul’s office declined to comment on the weakening economy, pointing to her remarks in June about increasing the state’s reserves. “We did not succumb to the pressure to spend all the surplus money we needed to set aside,” Hochul, 64, said at the time. “The wisdom of that is being borne out already.”

New York’s budget gap is expected to balloon to $6.2 billion by the 2027 fiscal year, from $310 million in fiscal 2024, according to a July financial plan that warned of “unmistakable signs of economic distress” including inflation and rising interest rates. The state missed its deadline to release its mid-year financial plan update, which was due Oct. 30.

Albany will also have to address a looming shortfall for the state-run Metropolitan Transportation Authority, which operates New York City’s subways, buses and commuter rails. The agency faces an estimated $2.6 billion deficit in 2025 as federal coronavirus aid dwindles.

A key variable in New York’s changing outlook is the financial sector and its high earners, upon which New York has grown increasingly dependent.

The finance industry made up 7.3% of the New York economy last year, compared with 5% in Connecticut, 3.6% in Massachusetts, and less than 3% of economies in all other states, according to the state comptroller’s analysis of US Bureau of Economic Analysis data.

Personal income tax now makes up two-thirds of the state’s tax base, up from about half in the mid-1990s, McMahon said. And in 2021, to make up for budget shortfalls, Cuomo implemented a tax increase for millionaires, pushing rates to among the highest in the US.

That over-reliance on the financial sector worked out in the state’s favor during the pandemic, when Wall Street drove capital gains income. The securities industry made up around 22% of state tax collections in the 2022 fiscal year, and 8% of city tax collections, according to state Comptroller Thomas DiNapoli.

But stocks are now falling — the S&P 500 Index has dropped about 19% over the past year — and DiNapoli has warned that Wall Street’s pandemic-fueled boom is over. Pretax profits in New York City’s securities industry tumbled to $13.5 billion in the six months through June, down 56% from a year earlier, DiNapoli said, and “a prolonged downturn could negatively impact state and city coffers.”

If capital gains and bonuses of the highest income earners are hit by a recession, personal income taxes could drop as much as 30% in a single year, said McMahon of the Empire Center.

New York is still down about 437,000 jobs as of September, compared with January 2020, and the state’s labor market isn’t expected to fully bounce back until 2026. Many of those losses have been in service industries like leisure and hospitality as international tourism continues to lag and employees opt to work from home instead offices.

Meanwhile, labor costs have been rising as a tight market delivers higher wages and puts further pressures on businesses.

A recession can bring rising demand for state unemployment funds, cash assistance and Medicaid and trigger the need for cuts in health care, schools and other services. That means harder decisions when allocating funds in the budget and a greater need for tough negotiations with the legislature, which Hochul mostly avoided during her first year in office.

New York used about $4.5 billion of around $12.7 billion in federal dollars last year, and will spend the rest through 2024 and 2025, but “it’s obviously going to get much more difficult” once federal aid begins drying up and the state has to make up the difference, especially if there’s a recession, said Blair Horner, executive director of the New York Public Interest Research Group.

One way for New York to blunt any immediate shortfalls in revenue is to tap its reserves. Hochul projects that the state will have $14 billion on hand at the end of the current fiscal year, more than four times what it had three years ago.

Those reserves can blunt some immediate shortfalls and forestall drastic action. But, in a recession, that buffer  “could be gone in a year and a half unless she cuts spending,” McMahon said.