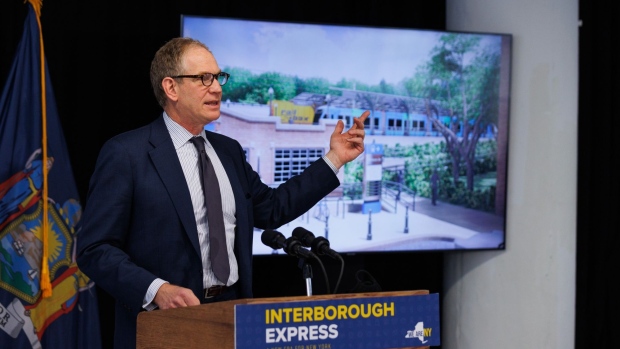 Janno Lieber, acting chairman and chief executive officer of the Metropolitan Transportation Authority (MTA), speaks during a news conference at the Brooklyn Army Terminal Annex in the Brooklyn borough of New York, U.S., on Thursday, Jan. 20, 2022. Governor Kathy Hochul said a feasibility study has been finished for a new mass-transit rail line project, named the Interborough Express, that would connect parts of Brooklyn and Queens, where some residents depend on buses for public transport to work and school. , Bloomberg

(Bloomberg) -- The head of New York’s Metropolitan Transportation Authority pledged to work with the city’s police department to decrease crime on a transit system that saw 8 murders in 2021, the most since at least 1997.

Earlier this month, a 40-year-old manager at consulting firm Deloitte died after being pushed onto the tracks at the Times Square subway station. Harassment and assaults have also increased on the city’s subway system, an issue Mayor Eric Adams is expected to address when he releases a wider public safety plan for the city on Monday.

The MTA will be communicating with New York City’s Police Department every day to help address the spike in violent incidents on the system, Janno Lieber, the MTA’s chief executive officer, said Monday during a subway and bus committee meeting.

“It’s critical to the future of our city,” Lieber said. “We have to allow people to get back to their normal lives. And if they’re scared to travel on mass transit, they can’t. It’s that simple.”

The MTA needs to increase confidence in a subway system that’s struggling to bring back riders as many residents continue to work from home. Recent weekday subway ridership is nearly half of pre-pandemic levels.

Earlier this month, Adams said 1,000 police officers will shift to transit stations and will walk inside train cars and interact with passengers instead of monitoring from station platforms. Governor Kathy Hochul has pledged more mental health workers to work throughout the subway system.

Robberies, burglaries, and grand larceny were down in 2021 compared to a year ago, but murder, rape and assault felonies increased, according to police data highlighted in MTA meeting documents.

Uniformed police presence on subway trains and stations will be constant to address the issue, NYPD’s Chief of Transit, Jason Wilcox, said during Monday’s committee meeting.