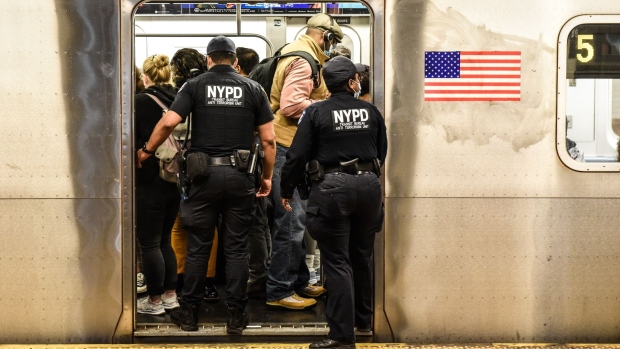 New York Police Department (NYPD) officers enter a subway at a station in New York, US, on Wednesday, May 25, 2022. New York City's subway system is carrying fewer riders than expected this year as crime has spiked, including a fatal shooting on Sunday and a violent subway attack last month that shook the city. , Bloomberg

The move comes after the US Supreme Court struck down a New York law that limited who could carry a handgun in public. Local officials were reviewing how to define “sensitive areas” where the court said guns can still be banned.

“Protecting our employees and customers is MTA’s highest priority and the presence of guns within a sensitive place like New York’s transit system is an unacceptable risk,” Paige Graves, general counsel to the MTA, said in a statement Thursday.

The court’s ruling comes as New York City’s subway system -- where weekday ridership of about 3.5 million is the most in the U.S. -- has been rocked by shootings and high-profile attacks this year.

A man injured 23 people in April when he opened fire in a subway car heading from Brooklyn to Manhattan during the morning rush hour. The next month, in an unprovoked incident, a man was shot and killed on a subway train as he was heading out for Sunday brunch.

There were eight murders on the subway last year, the most since at least 1997. There have been 200 reported assaults in January through April of this year, the most for that time period in at least 25 years.