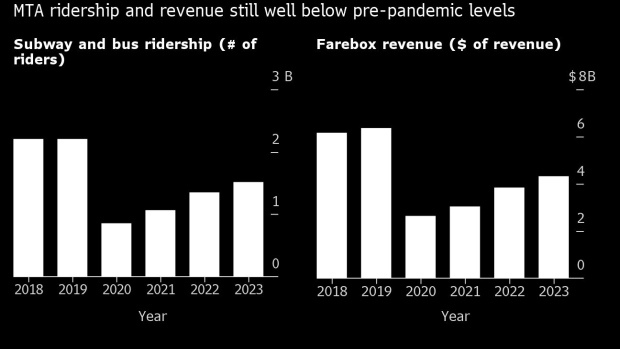 Commuters use MetroCard vending machines at a subway station in New York, US, on Thursday, June 30, 2022. The head of New York's Metropolitan Transportation Authority warned the agency's anticipated $2 billion budget gap may widen in 2026 as it struggles to win back riders. , Bloomberg

(Bloomberg) -- Riders aren’t returning to New York City’s subways in enough numbers to blunt a worsening cash crisis, forcing administrators to acknowledge they need to rethink how the agency finances itself.

Officials from the Metropolitan Transportation Authority, a state agency that runs New York City’s subways, buses and commuter-rail lines, plan to sit down with lawmakers and labor groups in the coming months to begin negotiations on new sources of funding and cost cutting. They say it’s too early to discuss specific options. But successful measures in other US cities offer clues as to what New York may consider.

The MTA has seen weekday subway ridership plateau at about 60% of pre-pandemic levels as many office workers have settled into working from home. Before the pandemic, farebox ticket sales and tolls covered half of the agency’s operating costs. That ratio is now down to about 30%, MTA data show. That gap means the agency faces a $2.6 billion operating shortfall in 2025, and absent a new funding source, commuters may see deep service cuts and steep fare increases.

“Their revenue model is just not viable anymore,” said Rachael Fauss, senior research analyst at Reinvent Albany, which advocates for greater transparency and accountability in the state and city governments. “The best case is that they get new, ongoing, dedicated state aid. Not sort of a one-shot thing because the problem of reduced ridership isn’t going away anytime soon.”

NYC Subway Use Rebounds Faster on Weekends Than Weekdays

Public transportation systems across the US are dealing with a slower rebound in ridership as people embrace working from home at least part of the week. S&P Global Ratings expects mass-transit ridership in the US won’t reach 75% of pre-pandemic levels until 2025, a year later than the firm’s prior forecast.

“Dealing with this is the only way we’re going to be able to support the region’s recovery and deliver on our mission,” Janno Lieber, the MTA’s chief executive officer, said during a July 27 meeting. “And that is an equity mission as well as a mobility mission, that every community -- and especially those who don’t have the option to get into a $50 Uber -- can get where they need to go and true accessibility for all.”

Most transit networks, including the MTA, rely on state or local support from sales and property taxes or other dedicated sources of funds as farebox receipts are insufficient to cover all operating expenses.

One potential funding source could be additional sales taxes, a levy that other transit systems depend on heavily to pay for their operations. While the MTA expects to receive $1.3 billion this year in sales-tax revenue for operations through a Metro Mass Transportation Operating Assistance Fund, that’s a fraction of an $18 billion budget. Dedicated sales-tax receipts make up about half of the total revenue for transit providers in Boston, Philadelphia and San Francisco and 80% for Los Angeles’s public transportation system.

The MTA in late 2023 or early 2024 plans to begin charging motorists driving into Manhattan south of 60th street. The congestion pricing initiative is the first of its kind in the US and is expected to bring in $1 billion of revenue annually that the MTA would borrow against to raise $15 billion for its multi-year $51.5 billion capital budget, which aims to modernize the more than 100-year-old system.

But diverting the congestion-pricing revenue to the operating budget -- which state lawmakers would need to approve -- would weaken the agency’s capital plan, of which 80% supports state-of-good repair and maintenance work. “It’s the biggest source of revenue for the capital plan and without congestion pricing, the capital plan would be gutted,” Fauss said.

If the agency doesn’t find new funding it would be forced to reduce service and boost fares higher than already planned. That means commuters would have to pay more to ride and wait longer for trains that break down more often.

“I don’t think cutting service gets us anywhere,” Andrew Albert, an MTA board member, said during a July 27 meeting where officials discussed the MTA’s looming deficits. “It then means fewer riders will opt for the system, which means you begin that downward spiral of death -- fewer riders means the deficit grows even more.”

More immediately, the MTA needs to deal with a spike in crime and the fear that accompanies major tragedies, including an attack in April where a man opened fire on a subway car in Brooklyn, that has kept people off the system. It also must address fare evasion, which increased during the pandemic and is estimated to cost the agency $500 million this year. About one out of every three New York City bus riders skips the fare, the MTA says.

The MTA should be looking at cost reductions now in its operating budget, according to Andrew Rein, president of the Citizens Budget Commission, a nonprofit group focused on state and city finances. The transit agency should realign service with fewer riders, ask workers to contribute more to their health insurance and consider one-person train operation rather than two, he suggested.