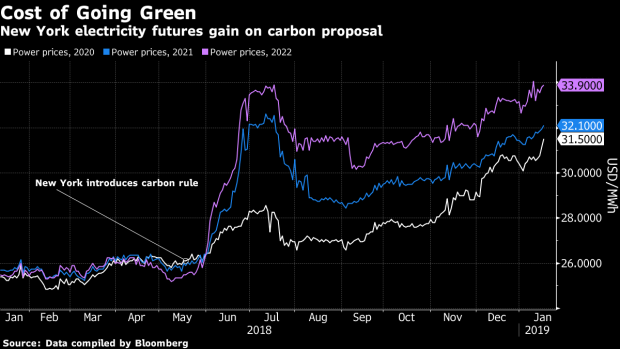 (Bloomberg) -- New York’s plan to put the state’s last coal-fired power plants out of business hasn’t even been approved yet and electricity is already trading like they’re shut.

The price of power in 2021 in New York City and other regions surged more than 30 percent beginning in May. The only major difference between then and now: a pending state rule to limit power-plant emissions that was designed to eliminate coal-burning power plants by the end of 2020.

States that are taking more aggressive steps to curb climate change should pay attention to this early reaction. Governor Andrew Cuomo has set a target of getting half of New York’s electricity from renewable sources by 2030, and this is the first time a state has targeted coal by using its regulatory authority to limit carbon emissions. While the plan wouldn’t kick in until 2021, it’s already affecting power markets and shows that these efforts may come with a cost.

“New York is a cautionary tale,” said Nicolas Loris, an energy economist at the Washington-based Heritage Foundation. “You’re going to have some negative implications from shuttering coal, from business passing those higher energy costs onto consumers or absorbing those costs themselves.”

The New York Department of Environmental Conservation’s proposed rule announced in May creates a carbon emissions standard that’s all but impossible for coal plants to meet. The only way for New York’s last two coal-fired facilities to comply would be to invest in costly upgrades, switch to natural gas or shut down. Regulators have said they don’t expect any coal plants to remain open once it takes effect at the start of 2021.

That had an immediate effect on power futures. Forward prices for 2021 and 2022 in regions including New York City, Albany and the Hudson Valley surged as much as 33 percent in the following weeks. That’s caught the attention of big power consumers.

“Electricity markets are already beginning to experience the price effects of the DEC’s proposed rulemakings and other policy-related efforts,’’ Multiple Intervenors, a trade group representing about 60 big power users, said in public comments submitted in response to the proposal. The group also said there’s no sign the agency had evaluated the potential impact on electricity prices. A spokesman declined to answer questions.

New York’s remaining coal plants are the 655-megawatt Somerset power facility, about 60 miles (100 kilometers) west of Rochester, and the 155-megawatt Cayuga site in the Finger Lakes region. Riesling Power, a Blackstone Group affiliate, purchased them both in 2016, and hasn’t said how it plans to respond to the proposed requirements.

“We’re open to working constructively with all stakeholders on options to preserve local union jobs, reduce environmental impacts and help ensure we continue to meet the energy needs of New Yorkers,’’ Paula Chirhart, a Blackstone spokeswoman, said in an email.

Blackstone has yet to tell the state about its plans. The New York Independent System Operator, which runs the power grid, said it hasn’t received a “deactivation notice” for the Somerset or Cayuga plants. If they do shut down, NYISO would have to assess “potential reliability needs,’’ according to an October report.

Riesling, the plants’ operator, called the proposal “a clear regulatory overreach,’’ according to public comments, and said the state failed to evaluate the potential economic impact to the region if the plants are shut down.

“DEC does not typically include an evaluation of electricity prices” when studying proposed rules, Erica Ringewald, an agency spokeswoman, said in an email. Coal accounts for less than 1 percent of New York’s power, and the agency “does not anticipate a material impact on electricity prices.”

But there probably will be an effect, said Ignacia Mercadal, assistant professor at Columbia University’s School of International and Public Affairs.

“As the coal generators would shut down, prices are expected to increase because demand will need to be covered by new sources of electricity, which are typically more expensive,’’ Mercadal said in an email.

To contact the reporter on this story: Jim Efstathiou Jr. in New York at jefstathiou@bloomberg.net

To contact the editors responsible for this story: Lynn Doan at ldoan6@bloomberg.net, Will Wade, Reg Gale