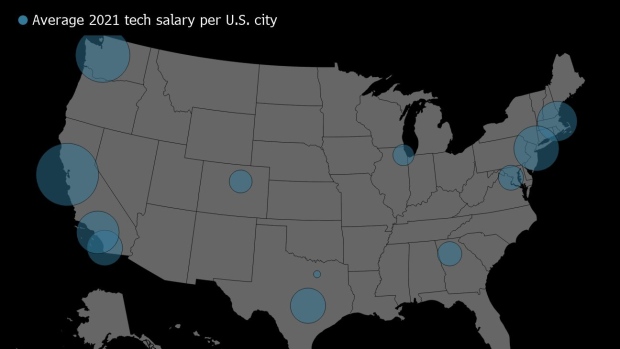 A person wearing a protective mask crosses Post Street in front of SalesForce Tower in San Francisco, California, U.S., on Wednesday, April 15, 2020. California Governor Gavin Newsom on Tuesday laid out rough benchmarks for reopening his state's economy - and radically reshaping daily life in the process - as he tried to bring other states into his West Coast coalition to fight the new coronavirus. Photographer: David Paul Morris/Bloomberg , Bloomberg

(Bloomberg) -- Salaries for tech workers in San Francisco and New York have declined for the first time in about five years, a result of the pandemic-induced push for remote work that’s driving talent to cheaper U.S. cities.

San Francisco still offers the highest average pay for tech workers in the country, but the rate has slipped 0.3% from last year to an annual salary of $165,000, according to a report from Hired, a marketplace for tech jobs. In the U.S. overall, industry salaries are down by 1.1%, with the average compensation now at $152,000. Cities like New York, Atlanta and Dallas also registered decreases.

Meanwhile, salaries rose by 4.6% to $158,000 in Seattle, home to Amazon.com Inc., and by 5% in Austin, Texas, which has attracted companies like Facebook Inc. and Alphabet Inc.’s Google, and will soon welcome Tesla Inc.’s headquarters. In San Diego, a major remote-work destination, salaries jumped 9.1% to $144,000, the largest increase in the country.

“We’re seeing movement,” said Hired Chief Executive Officer Josh Brenner, “to some of these smaller markets driven by the actual lifestyle there.” He said, “people are realizing San Diego has a nice way of living, good weather and it’s by the beach.”

About eight in 10 tech workers are still working fully remotely, and a vast majority would like to stay this way, which has contributed to the big-city exodus, according to the survey,

San Francisco’s high cost of living is part of the reason workers are moving from the nation’s tech hub to smaller cities, Brenner said. While San Francisco and New York offer higher net salaries, they are offset by the high cost of rent, groceries, local taxes and more. The report concluded that earning the average $165,000 salary in the Bay Area is the equivalent of making more than $240,000 in Dallas and Atlanta. Only New York and Washington top San Francisco’s cost of living, according to the report.

“Austin has has a lot to offer people and there are obviously tech companies moving there,” Brenner said. “But also a lot of remote workers are saying ‘I’m going to leave my very expensive big city and move to Austin.’”

The report analyzed more than 525,000 interview requests and 10,000 job offers facilitated through Hired’s marketplace from January 2019 through June 2021, including more than 17,000 participating companies and 180,000 job seekers.