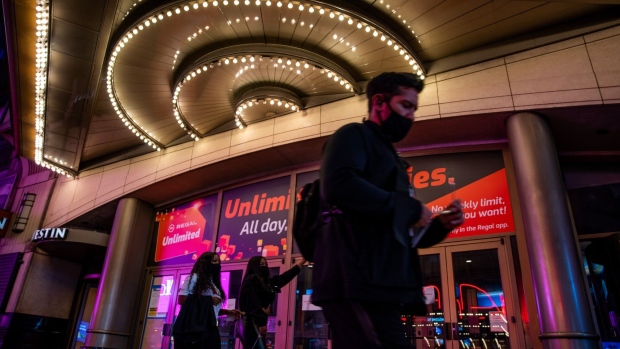 Pedestrians pass in front of a Regal Cinemas movie theater on 42nd Street in New York, U.S., on Tuesday, Oct. 6, 2020. More than 7,000 movie screens will be dark in the U.S. this weekend as the Regal theater chain said it will shut down all 536 locations on Thursday. Photographer: Amir Hamja/Bloomberg , Bloomberg

New York state moved to reopen ski resorts and movie theaters, giving a much needed reprieve for the entertainment businesses that are among the last to get a green light to resume operations.

Governor Andrew Cuomo said this weekend that cinemas, except for those in New York City and counties with high infection rates, can reopen at 25% capacity next Friday, with up to 50 people per screen. Ski resorts can open at 50% indoor capacity, beginning Nov. 6, and outdoor capacity on mountains will be cut by 25% during peak days.

The decision lands as the movie industry has been struggling to stay afloat amid lockdown restrictions. Hollywood studios have delayed the release of their big 2020 films, while moviegoers are reluctant to show up without new blockbusters.

In the U.S., about 48% of theaters have reopened so far, according to researcher Comscore Inc, though those in New York City and Los Angeles, two major markets, have yet to resume business.

New York’s limited cinema opening is “welcome news” for the industry, said Paul Dergarabedian, senior media analyst at Comscore. “As we’ve seen in Los Angeles, those counties within commuting distance of closed cities have seen a notable uptick in attendance.”

AMC Entertainment Holdings Inc., the largest cinema company in the world, said it is doing everything it can to raise fresh cash to weather the pandemic. Cineworld Group Plc has temporarily suspended operations at all its American and British movie theaters.