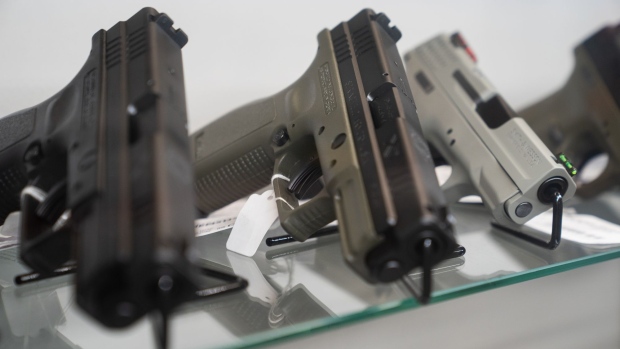 Smith & Wesson Brands Inc. and Springfield Armory Inc. semi-automatic pistols for sale at Hiram's Guns / Firearms Unknown store in El Cajon, California, U.S., on Monday, April 26, 2021. President Joe Biden's planned executive actions would crack down on "ghost guns," which can be assembled from kits and are not traceable by law enforcement because they lack serial numbers, as well as braces for pistols that make firearms more stable and accurate. , Bloomberg

(Bloomberg Government) -- New York’s getting ready to go around a recent US Supreme Court decision by making schools and subways no-gun zones and by making it more difficult to obtain a permit to carry a firearm.

Across the country, Democrats in California also are exploring other ways to restrict gun ownership, as blue states respond to the justices striking down New York’s concealed-carry law. That ruling puts into question concealed-carry laws in several states, including California, Massachusetts, New Jersey, Maryland, and Hawaii.

“We take this deadly seriously. This Supreme Court decision was a setback for us, but I would call it a temporary set back,” New York Gov. Kathy Hochul (D) said at a Wednesday news conference.

The governor and the Democratic-dominated Legislature negotiated the details of the new gun legislation to speed its passage in votes scheduled for Thursday.

Hochul said she and legislative leaders are still working out the details, but she expects to be able to sign the legislation Thursday.

The action follows a series of mass shootings, including one May 14 at a grocery store in Buffalo.

Hochul said she and her team have been working with think tanks and legal experts, but it’s unclear whether any of the legislation would withstand a legal challenge in light of the high court’s broad interpretation of Second Amendment law.

“When the Supreme Court is writing opinions that are recognizably rooted in typical legal reasoning, you can use those opinions to guide what decisions about what measures might be constitutional given the court’s decisions,” said Heidi Li Feldman, professor of law at Georgetown University Law Center. But, she said, “We’re not in regular legal times.”

In New York Rifle & Pistol Association v. Bruen, the court threw out a century-old law that limited who could carry a handgun in public in New York. The opinion specified that firearms could be banned in sensitive places, leaving the definition of sensitive open to interpretation.

The California Legislature is considering a package of new firearms restrictions, including one (S.B. 918) that would require applicants to list all prior arrests, criminal convictions, and any restraining protective orders issued against them in California or anywhere else in order to obtain a concealed license.

The measure also would limit who’s eligible to carry concealed weapons, said state Sen. Anthony Portantino (D). “We want to craft something that is going to withstand a court challenge that may or may not come. But we want to make sure that we do everything we can in our power to prevent a tragedy,” he said. The Supreme Court decision “does provide us a road map for going forward and that’s what we’re going to do,” he said, adding that “passing a background check or review of mental health records, and completion of a firearm safety check” remain constitutional.

California lawmakers also are considering legislation (S.B. 505) that would require gun owners to carry liability insurance and be held civilly liable for property damage, injury, or death resulting from the use of their firearms. Gun owners would have to answer insurance company questions about how many weapons the owner has and how they’re stored, author Sen. Nancy Skinner (D) told the Assembly Judiciary Committee.

Gov. Gavin Newsom (D) has promised to sign the restrictions into law.

All the bills “will pass and they will all be signed because this is vindictive retribution from sore losers. Any pretext of thoughtful consideration of proposed laws is history,” said C.D. Michel, a senior partner with Michel & Associates PC in Long Beach, Calif., and California Rifle & Pistol Association president.

California lawmakers “want to force CRPA to challenge everything in court. And CRPA will,” Michel said in an email. “The lines to test constitutionality still aren’t drawn precisely, but they are bright enough to see that most of these proposals will not pass constitutional muster.”

Sam Paredes, Gun Owners of California executive director, described that state’s legislation as a “blank check,” with new provisions and restrictions that have “no analogue to the Second Amendment at the time of the founding.”

“I’m sure we will find ourselves in court,” he said. “We feel very confident that we will win and that this bill will never become law.”

Feldman also sees a path directly from the governors’ desks to courthouses.

“We’re in for years and years and years of litigation assuming that there isn’t a more cataclysmic shift,” she said. “The larger blue states are the richer blue states, and they have well-funded state attorneys generals, and those are the people who are going to defend these laws.”

To contact the editors responsible for this story: Katherine Rizzo at krizzo@bgov.com; Tina May at tmay@bloomberglaw.com