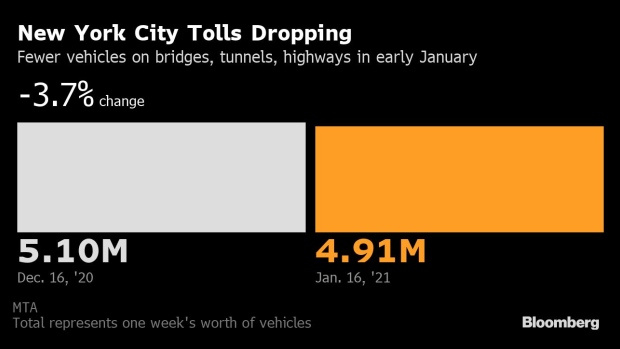 Traffic moves through Times Square in New York, U.S., on Thursday, June 11, 2020. New York streets got a little more congested this week as the city entered Phase 1 of its re-opening from the coronavirus-imposed lockdown. , Bloomberg

(Bloomberg) -- New York City traffic levels are showing a sluggish start to the year, a reminder that a vaccine-led recovery will take more time to perk up fuel markets.

Traffic on 11 New York City highways, bridges and tunnels was at about 4.9 million vehicles in the week ending January 16, according to Metropolitan Transportation Authority data. That’s about a 3.7% decline from month-ago levels.

Weak consumption has vexed the oil industry since the start of the Covid-19 pandemic. While a vaccine rollout is providing some optimism around a recovery down the road, gasoline supplied, which the U.S. government uses as a proxy for demand, is still at the lowest seasonally since the mid-1990s. That’s helped push East Coast fuel inventories to the highest for this time of year since 2017.

New York City toll traffic this month has been about 6% below congestion levels at the same time last year. The toll data covers most major connections between New York boroughs, including the RFK/Triborough bridges and tunnels into Manhattan and Brooklyn.