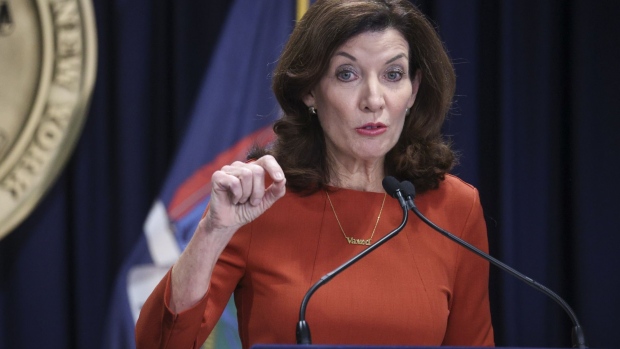 (Bloomberg) -- Two groups of New York health care workers asked an appeals panel to block a requirement that they receive Covid-19 vaccinations, claiming their religious beliefs bar them from getting the shots.

A ruling will likely determine whether the state can keep unvaccinated workers from their jobs in hospitals, nursing homes and other health care settings as it tries to control coronavirus infections. The federal appeals court in Manhattan heard arguments in two appeals on Wednesday. The mandate is on hold at least until the court rules.

“This rule is running headlong into Title VII,” Christopher A. Ferrara, who represents doctors, nurses and other workers in one group, argued. He was referring to a federal civil rights law that bars employment discrimination based on race, sex, religion, national origin and other characteristics.

The arguments come amid a national debate over vaccine mandates, with dozens of suits filed by health care workers, police, teachers and others who don’t think they should be required to accept shots under threat of being fired or sidelined. Officials behind the mandates argue they’re necessary to halt the spread of Covid-19, and point to a long history of governments legally requiring that people be vaccinated against polio, diphtheria and other illnesses.

In the case Ferrara argued, the health care workers won a preliminary injunction from a judge in Utica, New York, barring Gov. Kathy Hochul and other state officials from enforcing the rule without an exemption for people with sincere religious objections. A lawyer for the state asked the panel to overturn the injunction and allow New York to enforce the mandate.

Ferrara argued that Title VII preempts the state from issuing the emergency rule. The mandate allows a medical exemption for people with conditions that conflict with receiving the vaccination. He said the decision not to include a religious exemption shows the rule has an anti-religious bias in violation of the First Amendment’s right to free exercise of religion.

In the other case, three workers sued to block the mandate entirely, supported by We the Patriots USA, a nonprofit group whose website boasts that its lawyers are “taking on the tyranny of COVID fascists and other enemies of liberty from coast to coast!” The group also argues that the mandate violates the First Amendment and should remain blocked until courts can sort out whether it’s lawful.

The three workers said their faith prevents them from accepting any of the major vaccines distributed in the U.S. because they say the drug companies behind them relied on a cell line “harvested from aborted fetuses” in the 1970s and 1980s. They said abortion violates their religious principles. Many religious groups and figures, including Pope Francis, the leader of the worldwide Catholic Church, have urged followers to get vaccinated.

A judge in Brooklyn, New York, last month declined their request for an order blocking the mandate.

No ‘Hostility to Religion’

In response to a question from one of the judges Wednesday, the workers’ lawyer, Cameron Atkinson, said a ruling to strike down the health care vaccine requirement would logically require other vaccine rules to allow for religious exemptions, including those requiring children to be vaccinated to attend school.

QuickTake: Can I Be Required to Get Vaccinated Against Covid-19?

Steven Wu, a lawyer representing New York in both of the cases, said there’s no conflict with federal law and that employers can take reasonable steps to accommodate their workers’ religious concerns without running health risks.

“The rule is neutral,” Wu said. “It is neutral on its face, and it doesn’t stem from any hostility to religion.”