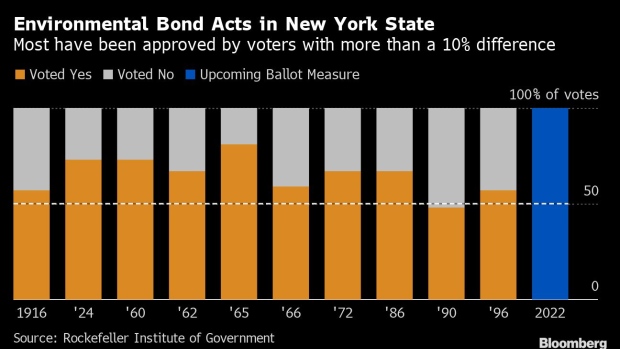 (Bloomberg) -- New Yorkers on Tuesday will vote on whether to help their neighbors most affected by climate change by approving a measure that would also boost ESG investing in the $4 trillion municipal bond market.

On the state ballot is a $4.2 billion environmental bond, the largest borrowing referendum in the nation this Election Day and if it were to pass would be one of the biggest for environmental, social and governance purposes since California approved a $7.5 billion plan for water-related projects eight years ago. Voters in New York historically have backed such ballot measures, and a recent poll showed this one is likely to pass.

Approval would accelerate a trend in the $4 trillion municipal debt market, with voters from Maine to California having authorized more than $15 billion in environmentally-focused bonds since 2014, according to a Bloomberg analysis of past measures. The New York plan is designed to improve water quality, while increasing investment to reduce the risk of floods and other disasters linked to climate change, according to the ballot measure.

“The focus on climate change mitigation within this act is significant,” said Laura Rabinow, deputy director of research at the Rockefeller Institute of Government. “It’s something that we haven’t seen in prior environmental bond acts in this kind of explicit way, and that’s tremendously important given New York State’s existing commitments and goals to clean energy and climate impact reduction.”

The borrowing plan was first proposed by former Governor Andrew Cuomo for the 2020 ballot, then delayed because of the pandemic. His replacement, New York Governor Kathy Hochul, increased the amount by more than $1 billion and won support for the measure from a coalition including labor unions, climate justice organizations and construction workers.

“We’ve seen that with (Hurricane) Ida and several of the major storms that have hit New York, we just weren’t prepared,” said Kate Kurera, deputy director of Environmental Advocates NY. “The consequences of not investing are immense in terms of damages the state will incur, as well as loss of life.”

A poll by the Sienna College Research Institute released Oct. 18 said 54% of voters plan to back the proposal, officially called the Clean Water, Clean Air, and Green Jobs Environmental Bond Act of 2022. Activists say it’s a sign that New York is serious about fighting the effects of climate change after almost 26 years since the last environmental bond vote.

“We saw what a storm can really do, and the impact on our region from Hurricane Sandy (in 2012)-- 650,000 homes were destroyed, a lot of New Yorkers lost their lives, as well as interruptions to the supply chain and vulnerability in energy infrastructure,” said Amy Chester, managing director of Rebuild by Design. “It was a pivotal point for our government to realize it’s not just about the hurricane storm surge event, but we’re all actually vulnerable.”

Meanwhile, the role of the municipal bond business in managing weather-related disasters is expanding. Harris County, Texas residents voted by an 86% majority for $2.5 billion in bond financing to help the Houston area recover from Hurricane Harvey in 2018. Along with New York, Rhode Island voters this year will consider a $50 million environmental bond measure.

“There’s a growing demand for bonds with this type of use of proceeds,” said Robert Azrin, municipal research analyst at Breckinridge Capital Advisors. “Part of this is the demographics and generational transfer of wealth to younger generations who have a greater appetite for helping to try to solve some of these climate change problems.”

Another ESG element of New York’s bond measure is a pledge to use at least 35% of the proceeds in disadvantaged communities, potentially creating almost 84,000 jobs, according to an environmental impact report by AECOM, a Dallas-based infrastructure consulting firm.

“This is a particularly notable historical level of investment, especially considering there’s a promise that a large portion of the money will go to under-resourced communities,” said Sonal Jessel, director of policy for environmental group WE ACT. “This is setting a precedent of a lot more funding to address climate change and environmental health issues at a level that is not normal.”

To be sure, New York State Conservative Party Chairman Gerard Kassar is critical of the bond plan, saying “New Yorkers do not need another $4.2 billion in public debt.” He added the borrowing “will be issued at the highest interest rates New Yorkers have seen in decades.”

Muni analysts speculate that if the measure succeeds, the bonds could carry a green label, which is a sector of the market that has been growing.

“I wouldn’t be surprised if New York State does choose to issue with a labeled bond, given the mandate of the bonds being for environmental purposes,” said Ruth Ducret, senior analyst of municipal research at Breckinridge. “The market aligns so well with the purpose of these bonds.”