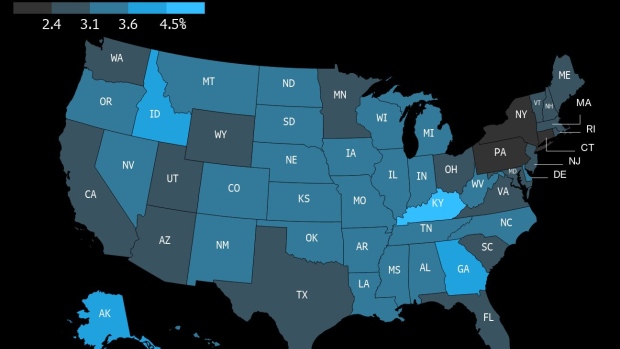 Pallets of ice cream sit stacked inside a refrigerated warehouse at a Kroger Co. grocery distribution center in Louisville, Kentucky, U.S., on Friday, March 20, 2020. The coronavirus pandemic is leading Americans to buy more groceries, from poultry to dried goods, as they prepare for an extended period of so-called social distancing. Photographer: Luke Sharrett/Bloomberg , Bloomberg

(Bloomberg) -- Kentucky, a state with a large concentration of transportation and warehousing jobs, experienced a surge in people quitting their job in August as workers likely took advantage of supply-chain turmoil to pursue other opportunities.

The percentage of workers who quit jumped 1.4 percentage points from July to 4.5%, the highest level in the country, according to U.S. Bureau of Labor Statistics data released Friday. The quit rate is more than twice that of Pennsylvania and New York, at 2.1% and 2.2%, respectively.

The Labor Department previously reported that quits jumped to 4.3 million in August, or 2.9%, the highest on record dating back to December 2000.

High quit rates are usually seen in healthy job markets, where workers jump to better opportunities -- or simply are confident they can find a new job after leaving. The pandemic-era labor market has been puzzling economists, however, because the record number of people quitting coincide with both elevated unfilled openings and a drop in participation.

The Friday data provide a breakdown by states, showing that quit rates rose in 14 of them. Following Kentucky, the largest increases were found in Idaho, South Dakota and Iowa.

New York’s rate remains unchanged compared with July. But it’s been rising from a year earlier, when it stood at just 1.6%.