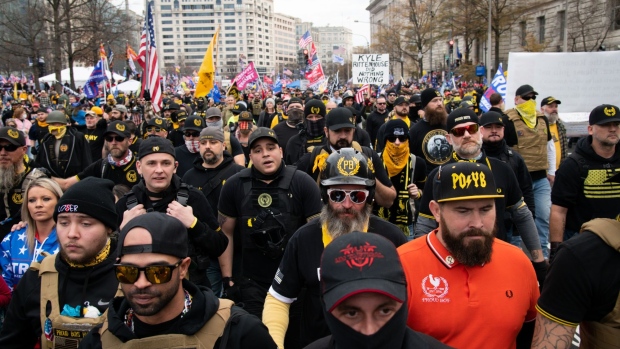 (Bloomberg) -- New Zealand has officially named the Proud Boys as a terrorist entity.

The designation for the right-wing group came quietly through a June 27 notice on the country’s government news service, The New Zealand Gazette. The notice said the reasoning behind the designation would be posted online, but the police have yet to do so.

Any person who “deals with the property of, or makes property or financial or related services available to” the Proud Boys will be liable to prosecution, the notice said.

The move marks the first time a US-based group has been added to New Zealand’s terrorist entity list. It comes as the Jan. 6 committee hearings reveal more details about the group’s involvement in the violent storming of the US Capitol.

“The Base” was also named a terrorist group in the notice.

The designations come months after police in New Zealand stormed the grounds of the country’s parliament following a three-week occupation that began as a protest against Covid-19 vaccine mandates. The event was reminiscent of the storming of the US Capitol, with violent clashes in nearby streets and fires that scorched lawns and a childrens playground.